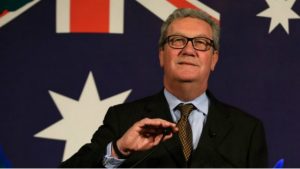 Few political allegations are as persistent as the charge that Donald Trump is Vladimir Putin’s puppet.

The theory goes like this: In 2016, the Trump campaign colluded with Moscow to hack into the emails of the Democratic National Committee and Hillary Clinton’s campaign chair. The Russians then gave the emails to WikiLeaks, which made them public and wrecked the anti-Russian Clinton’s chances of winning the White House — a result that confounded almost all political experts. Ever since the election, Trump and his team have been busily covering up the crime.

Trump is also vulnerable to Kremlin blackmail, we are told, because an intelligence dossier produced by an ex-British M16 spy shows Trump’s dirty deeds in Moscow hotels years before he ran for president.

All of this supposedly explains why Trump wants to appease a brutal dictator. It is also why headlines, such as “Putin’s first year in the White House” and “Donald Trump: Kremlin Employee of the Month” often litter the American press.

It is against this background that this weekend’s revelations are best understood. These are that a relatively low-level and inexperienced (and tipsy) Trump campaign adviser named George Papadopoulis told Alexander Downer in May 2016 that he had been told Russia had a ‘dirt’ file on Hillary Clinton.

The key question at the heart of this investigation is not whether the Russians had dirt on Clinton —including damaging emails. The issue is whether the Trump campaign was working with Russian officials to acquire and disseminate information about her that could be used to tilt the 2016 election.

Do the Downer revelations put Trump well and truly in the dock? Hardly.

It now seems clear that the former foreign minister’s decision to tip off US intelligence about his conversation with Papadopoulos — not the aforementioned dossier full of wild, discredited and unsubstantiated claims against Trump — inspired the FBI probe. But the Downer revelations provide no evidence of collusion.

Indeed, Papadopoulos’s main mission was to set up a meeting between Putin and Trump — not to acquire information from the Russians that would damage Clinton; much less work with Moscow to steal DNC emails and publicise them.

What about the fact that a Maltese professor living in London told Papadopoulos that Russian officials had informed him they had “dirt” on Clinton in the form of “thousands of emails?” For starters, the professor is not a Russian and Papadopoulos did not seek out this information.

Moreover, there is no evidence of subsequent conversations about these emails with the professor or anyone else. In fact, it appears that Papadopoulos did not even report the conversation to higher-ups in the Trump campaign.

There are other problems with the media’s collusion narrative. For one thing, if Trump is a puppet, someone other than Putin pulls the strings. And he’s not Russian.

In the past year, Washington has expanded NATO once again, strengthened sanctions on Moscow, supplied the Ukrainian military with lethal weapons, boosted aid to the Baltic countries and launched missiles against Syria’s Assad regime. These decisions outrage the Kremlin and will only increase East-West tensions.

True, Trump and Putin have a great personal rapport. But after a year with Trump in power, Russians are entitled to think that with friends like him, the Kremlin doesn’t need enemies.

Also bear in mind there is still no declassified evidence that shows that the Russian government hacked the Democrats’ emails — which incidentally show that the DNC colluded with Clinton against Bernie Sanders in the 2016 Democratic primaries.

Nor is there evidence in the public record that proves Moscow disseminated the material to Wikileaks. Indeed, Julian Assange denies the charge and the DNC refuses to allow the FBI to examine the computers and servers that the Russians supposedly hacked.

Even if the allegation of Russian meddling is true, Washington is in no position to cry foul. For decades, the US has interfered in the domestic affairs of other nations on a more or less regular basis – and not just dictatorships and Third World countries, but democratic allies as well as Russia itself.

None of this denies the fact that the Trump White House is its own worst enemy — as its failure to disclose every detail that might be relevant to the Russian investigations demonstrates.

However, you don’t have to follow the intricate details of what is known as Russiagate to raise doubts about the campaign to undermine Trump. News has emerged that Clinton campaign contributors and Trump haters, including a senior FBI official, were hired to help conduct the Independent Counsel’s investigation into any collusion. As troubling, the Clinton campaign helped fund the aforementioned intelligence dossier that dug up dirt on Trump.

After 18 months of investigations, there is no email or document or witness’s testimony that proves Russia-Trump collusion. In short, there is still no smoking gun.

Perhaps evidence of Trump-Russia collusion will emerge this year and show that Trump and his associates really are engaged in the most elaborate cover-up of all time. But the Downer revelations hardly constitute the kind of evidence needed to prove Trump’s guilt.