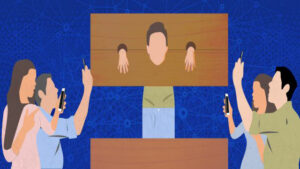 Shaming people has a long history and did not begin with social media, but the recent boom in publicly scarifying quarantine rule-breakers is both risky and counter-productive.

From the thrashing of ‘Bunnings Karen’ to the naming of three Queensland quarantine breakers, to the ubiquitous #Covidiots, coronavirus has shown our propensity — to use the modern euphemism — to ‘call-out’ rule breakers.

Certain behaviour — especially during a pandemic — can be infuriating, dangerous and potentially criminal. But the Queensland women will face court and likely excessive fines or gaol time. Knowing their names and faces does not make the public safer, and potentially puts them at risk.

This shaming is unsurprising, given how pandemics and contagions have a unique way of turning people against each other.

As researchers have noted, controlling pathogens relies on conforming to certain behaviours; and dissenters can be a risk to themselves and others. This fear of dissenters likely encourages the shaming and stigmatisation.

But, research has found, stigma during a pandemic can have serious negative impacts by delaying “detection and treatment efforts, cooperation with contact tracing and isolation measures.”

That is what makes public shaming so pernicious. It is never simply about an individual; the audience is much wider.

For every person who deliberately flouts the rules, there are others who are genuinely confused. Even following developments closely, it can be difficult to keep up with the rapid pace of change.

People are unlikely to seek out information or clarification if they think there is a possibility they could end up on a daily shaming list.

Although Australia has avoided widespread civil unrest during COVID, there are signs civil society is under strain.

Early on in the pandemic, there were “media requests to release the names, addresses and recent movement of people with COVID-19.”

A YouGov poll found nearly two-thirds of Australians supported “calling people out publicly” on social media, in person or reporting it to the police.

Subjecting people to their two-minutes of COVID hate might seem righteous, or helpful, but it will only coarsen and strain our society further.