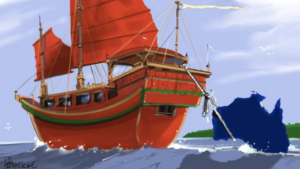 Even as the world has been transfixed by the vulnerabilities and the excitements of democracy in America, Beijing has underlined its own hugely contrasting pathway of power.

It has in recent days announced it will double its economy by 2035 — with Xi Jinping, seemingly, staying in control at least until then. It has trashed what was to be the world’s biggest stockmarket float for $US34bn ($47.5bn), captained by Alibaba founder Jack Ma, just two days out, underlining who is boss. And it has extended its commercial ­coercion of Australia, impacting sector after sector.

The Victorian government’s staunchly maintained adoption of the Belt and Road Initiative underlines that China’s continuing influence on Australian elites has only ever been exceeded by ­Britain’s.

Victoria’s memorandum of understanding with Beijing will remain in effect until October 8, 2023 unless terminated by three months’ written notice, which would be an awkward diplomatic step to take as lobbying of Canberra intensifies to ingratiate itself more to Beijing.

Despite setbacks earlier this year including COVID-19, the People’s Republic of China has resumed its extraordinarily influential engagement with key elites, especially in corporations, academia, and regional and local governments, around the world — including Australia.

Through a combination of patient persuasion including perennial talking points, through hospitality and flattery — and most importantly, commercial promises and threats — the PRC’s high-value elite partners are led to embrace China’s interests as genuinely the best interests of their own country or organisation.

How the PRC emerges from the pandemic and seeks to extend its international influence through its artful co-option of elites — and how governments and other institutions respond — will be key questions for the ­remainder of the 2020s.

The Victorian BRI MOU arouses more than one concern. The first is that controversial international arrangements need to involve Canberra substantially, and in this case, they did not.

Another is that, to judge from the MOU’s language, it appears that Victoria signed a document fundamentally presented by Beijing, rather than negotiating painstakingly a joint agreement. It is a Memorandum of Unctuousness as much as of understanding.

Just as each of China’s diplomatic partners has its own “One China” policy concerning Taiwan, so should each of its BRI partners develop its own BRI engagement instead of using a PRC template.

Like New Zealand, which joined Xi’s hallmark international strategy earlier, Victoria has so far failed to leverage the immense economic bounty it anticipated, in terms of fresh BRI-driven investments beyond those likely to have happened anyway, MOU or not.

The MOU commits Victoria to “promote the building of a ­common future” and to carry out ­“dialogues and exchanges, joint researches, pilot programs, ­knowledge sharing, capacity building, etc” … without expanding on the “etc”.

The Chinese consul-general in Melbourne, who played a prominent role in engineering the agreement — heralded as the first such sub-national BRI deal ­anywhere in the world — was ­rewarded by a cross-posting to the coveted role of consul-general in Chicago.

Xi told the Australian parliament in 2014 of “a steady stream of mutual understanding and friendship between our two peoples that have created the vast ocean of goodwill between China and Australia”.

However, in practice the “steady stream” is increasingly more narrowly connecting the two elites rather than “our two peoples” — due in part, at least, to the way the Chinese Communist Party insists on remaining gatekeeper to all Chinese people.

Re-booting the relationship to its former state is not an option, since China is changing too much under Xi. Nor is bald decoupling, as some in Washington wish. In Australia’s case the range of continuing connections remains too extensive, including those based on economic complementarity but also many warm — if increasingly fragile — people-to-people links.

Beijing’s relentless pressing of Australia since our pursuit of an international inquiry into the ­origins of COVID-19 compares interestingly with what happened when Canberra led global opposition to Japanese whaling, taking it to the International Court of Justice.

The response from Japan itself and from any members of Australian elites inclined to support Japan bears no comparison to the intensity of the continuing campaign by the PRC and its followers against Canberra for its role in conceiving the World Health ­Organisation’s investigation of COVID-19.

To attempt to regain Beijing’s approbation, Australia could re-prioritise its interests, say by preferencing commerce over security interests, most convincingly in China’s eyes by withdrawing from the US alliance.

It could also preference economic interests over values, such as by shifting its UN votes to support Beijing over its treatment of Uighurs or Hong Kongers, or by agreeing to extradite “fox-hunted” dissidents along with the allegedly corrupt.

Engagement with China will and should continue at many levels, but it is crucial that its terms are right and fair.

This must stem from an understanding that is open-eyed and truly mutual, in Xi’s own words. It requires embracing the nations in their full diversity, beyond their elites.

But Beijing’s in no mood for such engagement.