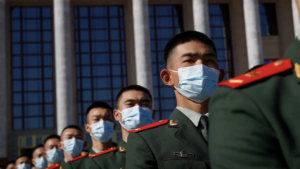 American novelist F. Scott Fitzgerald once remarked: “The test of a first-rate intelligence is the ability to hold two opposed ideas in mind at the same time, and still retain the ability to function.”

By that standard, several prominent journalists, former diplomats and business figures are intellectual geniuses. On several China-policy matters, they make contradictory statements at the same time. Here are three of them.

First, we are told that Australia’s political leaders must try to “rebuild trust” with Beijing, while not kowtowing as the Chinese Communist Party clearly wants us to do. But how does this strategy work?

It is not a herculean diplomatic task to “rebuild trust” with such a regime. It is an impossible diplomatic task – unless, of course, we capitulate to China, which is not going to happen under Coalition or Labor governments.

We are, remember, talking about a regime that is pumped up on nationalism and overwhelmed with resentment growing out of “the century of national humiliation”. It is this bullying nationalism that explains why Beijing is not good at winning friends and influencing people, as the heavy-handed “wolf warrior diplomacy” of China’s ambassadors and foreign-policy spokesmen makes clear.

We are now in a realist zero-sum game and the stakes are enormously high.

Second, we are told China is a truly dangerous threat to Australia, but we should just learn to live with China mainly by appeasing it. It is as if the US doesn’t exist and we don’t have the option of allying with Washington and like-minded states in the region to deal with this threat.

The critics acknowledge Beijing’s more aggressive stance in the Xi era: like all rising great powers, China demands deference from weak neighbours. Therefore, China will seek to dominate Asia just as the US has long dominated the Western hemisphere. Beijing wants a blue-water navy to project power across the world to protect its Belt and Road initiatives.

At the same time, the US does not tolerate peer competitors. As the doyen of foreign-policy realism Professor John Mearsheimer points out, the four potential peer competitors that the US faced in the 20th century – Imperial Germany, Imperial Japan, Nazi Germany and the Soviet Union – are on the scrap heap of history. Therefore, Washington will go to great lengths to stop China from becoming a peer competitor.

Third, we are told the US is in retreat from Asia, but we are also told Australia should oppose any US containment strategy. This is a paradox. Is America pulling up the drawbridge and locking itself out of Asia? Or is it engaged in a strategic competition with China?

In Washington, the dominant policy issue on which there is a bipartisan consensus is how to contain a rising China. Donald Trump, unlike his predecessors, recognised the importance of treating China as a potential peer competitor, militarily and economically. However, he failed to fashion an effective balancing coalition.

Although Joe Biden and his fellow Democrats supported the old policy of engagement, they now appear to be firmly committed to preventing China from dominating Asia. Incoming officials say they will work meticulously to improve relations with Asian allies and create an effective alliance that can keep in check China.

Notwithstanding the coronavirus crisis, not to mention its deep political divisions, the US will remain the world’s most technologically sophisticated economy and predominant military power for the foreseeable future. And as the global trendsetter in innovation, higher education and energy self-sufficiency, the US has the capacity to retain strategic dominance for decades to come.

Australians of all political persuasions (including this writer) have strongly supported engagement with China, which made economic sense. But the circumstances have changed.

What the critics of Australia’s policy fail to understand is that, after decades of living in a unipolar and globalised world where there was no great-power security competition, we are now in a realist zero-sum game and the stakes are enormously high for all concerned. This is not an ideal situation. But that’s how international politics works.