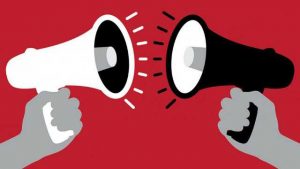 The answer to “hate speech” is not the introduction of a never-ending stream of laws designed to end it. This push is driven by the false idea Australia lacks sufficiently robust hate speech laws.

Imagine a scenario in which an indigenous commuter is threatened by a group of racists who say they will hit her and she shouldn’t be allowed on the train.

With all the focus on section 18C of the federal Racial Discrimination Act, most Australians may think it is the only legal recourse the woman has. There is a perception 18C is the only thing standing between racial minorities and a torrent of vile abuse.

Inciting and threatening violence is a public safety issue and has long been illegal. Even in liberal democracies, where free speech is respected, it is understood this type of speech is unacceptable because it violates the rights and freedoms of others.

Activists point to instances of racist abuse that threaten violence to justify the introduction of more hate speech laws, but such speech is already unlawful.

More laws will only make unlawful that which is already so.

Even though vilification laws have existed for many years, activists and human rights organisations want more.

Most Australian jurisdictions are reviewing their vilification laws. And, if the amendments proposed by Victorian MP Fiona Patten are an indication of what is to come, we should be concerned. Patten’s bill proposes making it illegal to says things that are “likely to incite” vilification towards racial and other minorities.

Weakening the vilification threshold could allow people to bring trivial complaints because the focus of the offence would no longer be on whether a speaker intentionally or recklessly incited violence, but rather on whether someone believed their words could incite violence.

For example, someone could claim that genuine criticism of their religious belief or practices was vilifying speech.

There have been several cases in Australia where people have been subjected to expensive and time-consuming legal action because they expressed fundamental tenets of their faith or made jokes on social media.

Further law reform is also unnecessary because NSW has developed a model that addresses these concerns.

The NSW parliament last year passed the Crimes Amendment (Publicly Threatening and Inciting Violence) Act, which simplifies the process for investigating and prosecuting those who threaten or incite violence against racial and other minorities.

By maintaining an appropriately high threshold on speech that incites or threatens violence, akin to old public order offences against this type of speech, these simplified laws have appropriately protected free speech and the public safety concerns of minorities.

Patten wants her bill to show “that hate speech will not be tolerated in Victoria”.

But her proposal not only endangers free speech, it also assumes only laws can set the standards for public speech.

Offensive or hurtful speech does not need to be tolerated by society. Across the decades, Australia has organically established a set of social norms and manners that make speaking vile, racist and bigoted views socially unacceptable.

This was not achieved by legislative fiat but through the development of a collective social understanding that people deserve to be treated with respect regardless of their race, religion, sex or other characteristics.

People are right to raise the issue about the tone of public debate. But the best way to ensure quality public discourse is with a strong social fabric that respects difference of opinion.

The free speech versus hate speech debate is marred with confusion and misunderstandings. We need strong laws against incitements and threats of violence, and a strong social fabric to protect minorities and free speech.

Monica Wilkie is a policy analyst at the Centre for Independent Studies and author of Criminalising Hate Speech: Australia’s Crusade Against Vilification.