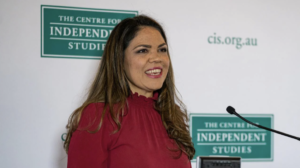 The term watershed is often misplaced in politics, but perhaps not so this past weekend. Jacinta Nampijinpa Price’s victory in a Northern Territory Senate preselection battle could be a turning point in Indigenous affairs.

This is because Price’s path to Canberra should mark the moment when old agendas are not only challenged and repudiated but replaced with new ideas that could help improve the lives of our most disadvantaged communities.

Price came to prominence five years ago when she delivered an address to the Centre for Independent Studies, a Sydney-based public-policy think tank that I head.

Titled Homeland Truths: The Unspoken Epidemic of Violence in Indigenous Communities, Price’s lecture was a powerful call to stop the violence against women and children that predominantly Aboriginal men inflicted.

As head of the CIS’s Indigenous affairs program, Price has scored intellectual points with a new political paradigm based on empowerment, the virtues of the work ethic and a recognition of the limits of state power to correct societal ills.

For her pains, she has been crudely denigrated by her opponents. (A Greens political candidate, for instance, once denounced her as a “coconut”, a highly offensive term implying an Aboriginal person is “white on the inside”.) The disturbing thing about such invective is not only the vitriol but also the unwillingness even to consider a different way of thinking about Indigenous affairs.

The problems plaguing our remote Indigenous communities are nothing new: we’ve all heard about the astronomically high rates of alcohol abuse, crime, domestic violence, lang­uishing education and employment levels, and intergenerational welfare dependency. As a result, there is an alarming and growing gap between remote Indigenous people and the rest of Australia, including Aboriginal Australians in the cities.

Since the Whitlam era, government policies and resources have tried and failed to solve these problems. Billions of tax dollars have been spent with minimal improvement. Lofty gestures of symbolism – from apologies to campaigns to have an Indigenous voice in parliament and to change the date of Australia Day – draw some attention to this tragedy. But they don’t fix any of these problems.

Price, the 40-year-old Walpiri-Celtic deputy mayor of Alice Springs, offers constructive alternatives to the Black Lives Matter narrative, which argues that systemic racism is responsible for Indigenous woes. She wants to base policy on evidence to deliver practical solutions and meaningful outcomes.

Here are a few policy areas she highlights in her recent paper on Indigenous disadvantage:

● Education reform: remote Indigenous children are still not taught basic skills in reading and writing in English, so they should receive bilingual teaching to introduce phonics, proper grammar and alphabet learning in earlier grades.

● Welfare reform: when there are poor education outcomes, there are poor job outcomes, and people end up dependent on welfare, which hinders individual initiative, risk-taking, personal responsibility and opportunity. So policy­makers should encourage training in entrepreneurship, which creates businesses and jobs, reducing poverty and welfare dependency.

A way forward is the cashless debit card, which ensures welfare payments are spent in responsible and meaningful ways: although it works like a bank debit card, people can’t use it to gamble, buy alcohol or drugs, or withdraw cash.

● Customary law: Under Aboriginal customary law, many Indigenous townships are blighted with a high incidence of murders, suicides, assaults and child abuse. Blaming colonisation and racism for these atrocities exonerates violent offenders and masks murder as manslaughter. This must change.

It’s true Price’s rise to power will be a genuine watershed only if these policy shifts are put into place. That will require the determination of leaders in both major political parties and pressure from an alert public to force the political class to shake things up. That battle never ends. However, after the policy disasters of the past half-century, we can see a glimmer of hope on the horizon.