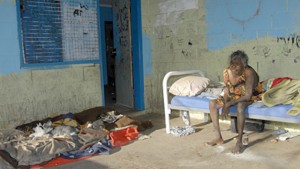 Ten years have passed since the federal government launched the Closing the Gap campaign.  But despite spending billions of taxpayer dollars, the relative life expectancy of Indigenous Australians hasn’t improved a jot.

The failure has prompted the government to review its multibillion-dollar Indigenous health programs. This is a much-needed step, but that is not enough; the government must actually use the findings to stop wasting money and start doing things that work.

Unfortunately, abundant evidence suggests that even when Indigenous programs are evaluated, governments ignore the findings. For example, a recent audit of the NSW Evaluation strategy found that neither the state Treasury or the Department of Premier and Cabinet were using the outcomes of evaluations to decide which programs to fund.

Olga Havnen, before she was sacked as Northern Territory Coordinator-General for Remote Services, wrote a damning report highlighting the way many organisations continue to be funded even after evaluations identify ‘serious deficiencies’ in their program delivery.

A recent Indigenous health campaign – No Germs On Me – ran three different television commercials encouraging people to use soap when they washed their hands.  Unfortunately, the evaluation found no change in participants’ beliefs, behaviours or attitudes. This is hardly surprising given that less than 50% of Indigenous people in remote communities have access to a T.V and many do not have functioning taps (or soap). Yet despite the failure of the strategy, the evaluators concluded that the reach of the advertisement was satisfactory and the program was worth continuing.

Everyone in the Aboriginal health industry professes their concern about the shocking health disparity between Indigenous and non-Indigenous Australians yet nothing changes.  Diseases that were eradicated in mainstream Australia 50 to 100 years ago such as trachoma and otitis media remain the leading cause of blindness and deafness among Aboriginal people living in remote communities.

Rheumatic heart disease is the result of untreated acute rheumatic fever, which is 100% preventable.  Open heart surgery costs thousands of dollars, while an injection of penicillin can be administered for as little as a dollar.

On the other hand, in Australia, since 1997, the National Health Medical Research Council has funded 19 research grants to study rheumatic fever totalling more than $11.2 million dollars.  While this is great for academic careers it has done very little for Indigenous health.

In their latest Closing the Gap Progress and Priorities report the Close the Gap Steering Committee recommends the federal government should hold an inquiry into racism in health care settings. While there are undoubtedly incidents of racism in the health care system, this is not the underlying cause of poor Indigenous health outcomes. Indeed, since the Aboriginal health industry was first established more than 30 years ago there has been an increased focus on providing culturally appropriate health care. The problem is not overt racism but the bigotry of low expectations.   Images of smiling, snotty-nosed Aboriginal kids on the front of health reports normalise Indigenous ill-health.

A recent article reported that 90% of Aboriginal children in remote areas have some form of otitis media and that around 50% of Indigenous children are functionally deaf.  According to Don Palmer, CEO of the Malpa Project, if 50% of the children in Sydney couldn’t hear there would be a public outcry, but the silence surrounding the release of these statistics has been ‘deafening’.

If we want to close the gap between Indigenous and non-Indigenous Australia, we need to demand the same high standards in service delivery and outcomes for all Australians, regardless of who they are and where they live.