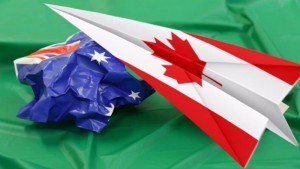 You can’t prove anything universal with a single example, but that hasn’t stopped opponents of the corporate tax cuts, with Canada being trumpeted as an example of an economy supposedly slumping after tax cuts.

But this shouldn’t be the way public policy is decided. Every country has many things happening simultaneously, some with large effect and some with small. It can be hard to isolate the impact of one factor, like company tax, on the whole economy — particularly when other significant things are going on, like as a commodity price boom, which benefited both Australia and Canada.

Canada also has its own unique characteristics, including being more affected by economic events in the US — plus having Vancouver’s useless vacant homes tax and a Prime Minister who eulogises Fidel Castro as a ‘remarkable leader’.

Let’s ignore this for a moment, and look at Canada’s experience with tax reform in isolation. Unfortunately for the nay-sayers, a reasonable analysis shows things turned out pretty well. 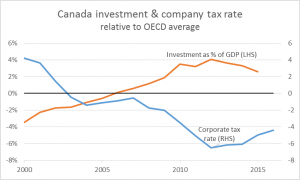 The story is the clearest with investment, with investment (orange line in the graph below) higher than the OECD average when their corporate rate (blue line) was below average, and vice versa.

This was of course during a mining boom, but opponents of tax cuts like ignoring other factors, don’t they? However we shouldn’t commit that error. If we now compare Australia and Canada, as two mining economies, we find Australia’s outperformance on investment has steadily declined as Canada’s corporate rate fell further below ours.

Perhaps Canada does have something to offer Australia after all, although not the sillier ideas about tax and Communist leaders.