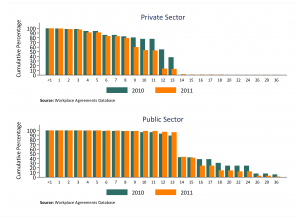 If the latest opinion polls are anything to go by, Budget 2015 has done more for the government’s primary vote than Budget 2014 — even if it has done little to improve the nation’s fiscal position.

But one budget measure that has not been well received by working parents is the government’s proposal to restrict taxpayer funded Paid Parental Leave (PPL) payments to those whose PPL workplace entitlements are less generous than 18 weeks of the full-time minimum wage ($11,500).

The government argues this reform is `a fair response’that will stop parents from `double dipping’ — receiving the PPL payment on top of parental leave provided by their employer – and will save $1 billion.

If the government is interested in PPL fairness it should consider abolishing the Maternity Leave (Commonwealth Employees) Act 1973 which legislates a minimum of 12 weeks of parental leave at full pay for Commonwealth employees.

As I outlined in an earlier piece, for most parents PPL payments are effectively a subsidy that allows private sector employers to cut back on PPL entitlements and offer higher wages or other workplace entitlements in lieu.

The first panel in the graph shows how the percentage of women employed under collective agreements in the private sector, who were entitled to more than 12 weeks of parental leave, declined with the introduction of taxpayer funded PPL payments in 2011.

This did not happen in the public sector for two reasons.

For federal employees, the fact that these minimum conditions are legislated limits the extent to which the government – as employer – can convert the subsidy into wages or other conditions.

While this is not the case for state government employees, who are also included in the figure, the federal and state governments are able to shift the cost of their workplace conditions onto taxpayers in a way that private sector employers are not.

As a result, federal public servants – and their political masters – are in a unique position to `double dip’ in a way that private sector employees cannot.

As it stands the budget measure has some serious design flaws but restricting taxpayer support to those who do not have access to parental leave workplace entitlements is a step in the right direction.