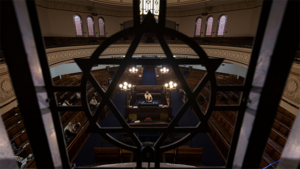 Many Australians assume that antisemitism—the hatred of Jews—is a cloud seldom casting a shadow over our landscape. And we can be thankful that in this country, attacks on synagogues, assaults on Jewish people, or vandalised Jewish cemeteries are rare occurrences. But the spectre of antisemitism still stalks the land.

Physical assaults and verbal slurs do still occur here, but increasingly, antisemitism in Australia take more subtle and nuanced forms that can easily be missed. And that should come as no surprise. Long a part of human history, antisemitism has never taken just one form; it appears in different forms, different mutations, and with different motivations.

Even making allegations about opinions held by a Jewish academic could be antisemitic. It sounds arcane, but Joel Katzav, a lecturer at the University of Queensland (UQ), has recently lodged a complaint to the Australian Human Rights Commission about the university’s handling of an alleged antisemitic incident involving criticism of him made by a student.

According to the complaint, Katzav chaired a committee that wanted a graduate student to modify parts of a thesis dealing with the German philosopher Friedrich Nietzsche. This displeased the student who alleged the reason Katzov was more favourably disposed towards—or “trying to whitewash”—Nietzsche was because he, Katzav, was Jewish.

Nietzsche died at age 55 in 1900 following a complete collapse of his mental and physical health, leaving many unresolved puzzles in his work.

Subsequent generations have often appealed to Nietzsche in support of their own views—even though scholars have disagreed wildly about what he actually said, especially in his declining years.

Some say Nietzsche was opposed to antisemitism; others say he laid the ideological foundations of Nazism—especially with the concept of the “superman,” used by the Nazis to give credence to ideas of racial superiority.

The student argued that because Nietzsche is now popular in Israel, Katzav was actually “whitewashing” Nietzsche to defend him.

But while there was a strong following for Nietzschean Zionism in Israel’s early days, there is little evidence that Nietzsche is popular in Israel today; nor is it at all evident that Israelis are actually using the philosopher’s arguments to promote the idea of Jewish racial superiority.

On the surface, the spat between Katzov and his student looks like a simple difference of opinion—compounded by the student’s frustration at the committee’s ruling.

However, to understand how the charge of antisemitism arose from this academic fracas, one has to look beneath the surface.

In 2016, a new definition of “antisemitism” was crafted by the International Holocaust Remembrance Alliance (IHRA) which states that antisemitism is a “certain perception of Jews” which may have “rhetorical” manifestations.

In other words, antisemitism is not just about physical or verbal assaults on Jews. It can include assertions aiming to delegitimise the State of Israel that go beyond simply criticising current Israeli government policy; it can also include assertions—as in the UQ case—about the opinions or beliefs imputed to Jewish people, such as Katzov.

Armed with the IHRA definition of antisemitism adopted by Australia in October 2021, it is easier to understand why it could be antisemitic for an aggrieved student to assume a Jewish academic must have sympathy for a 19th century German philosopher because that philosopher’s thought is assumed to be popular—because of its teaching about racial superiority—in Israel.

Katzov objected to the student’s remarks, and complained about the way the UQ handled the incident.

But Jewish groups, such as the Queensland Jewish Board of Deputies (QJBD), say that this kind of antisemitic behaviour is not an isolated incident.

Although rare, physical attacks on Jews and Jewish property still occur. But intellectual forms of antisemitism are just as dangerous.

Moves to “decolonise” the curriculum, or in other words, to denounce racism and any form of imperialism and colonialism, have fuelled campaigns against Israel—often in the name of “anti-colonialism”—especially on university campuses.

According to QJBD, this sort of antisemitic behaviour—especially involving blame levelled at a Jewish person for actions of the Israeli government—is on the rise in Australian universities.

QJBD is now calling for all Australian universities to adopt the IHRA definition of antisemitism, a move supported by former Education Minister Alan Tudge.

Katzov’s complaint sounds a warning that every Australian needs to heed. Our universities perform a crucial function in equipping students to be responsible citizens in our successful multicultural society. Each one of us needs to ensure that our commitment to human dignity remains free of the taint of any form of antisemitism.