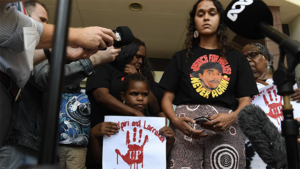 It’s just over week since a Northern Territory jury found Constable Zachary Rolfe not guilty of all charges in connection with the 2019 death of 19-year-old Kumanjayi Walker who was shot three times by Rolfe in a Yuendumu home.

Rolfe and then Constable Adam Eberl had attended the home to interview Walker who was wanted for threatening two Yuendumu policemen with an axe three days before. Walker lunged at Rolfe and Eberl with surgical scissors, stabbing Rolfe and continuing to wrestle Eberl on the ground after being shot once.

The case has been extensively covered by the media. The incident was recorded on police body camera; every movement analysed and scrutinised in detail.

The prosecution called experts to argue why Walker’s death was avoidable and Rolfe’s actions weren’t justified in defence of his partner. Rolfe’s defence counsel described these as an assembly of “armchair experts” brought in to justify a “flawed” prosecution, not properly investigated before charges were laid. Rolfe testified that he believed Walker was going to stab Eberl.

Ultimately, the case didn’t turn on what experts analysing a video years later think. It turned on what Rolfe perceived during a 2.6-second period in which he fired the final two shots. Having heard testimony from the experts, from Eberl and from Rolfe himself, clearly the jury thought Rolfe honestly believed shooting Walker was necessary to defend Eberl.

Walker’s family, some of whom I count among my close friends, are understandably devastated – both by his death and by the failure to secure any conviction for it. It’s almost impossible for family members in these situations to understand why death couldn’t have been avoided.

Many see Walker’s death as being about Indigenous deaths in custody. I see it as about the epidemic of violence and dysfunction destroying so many Indigenous families and communities in remote Australia.

Walker was loved by family and community members, many who tried to help and take care of him over his life. He was also feared. His violence towards his girlfriend Rickisha Robertson in the years before his death was savage and brutal, beginning when she was a child of 14. Nurses based in Yuendumu, evacuated shortly before his death due to escalating attacks on their homes, spoke of their particular fear of Walker. A visiting government worker had to be hidden after Walker threatened to bash her with an iron bar.

Walker’s life is a litany of violence from a young age: perpetrated by him, around him and most likely against him.

Handed to friends by his mother at birth, he was raised by community and extended family members in dysfunctional environments, with domestic violence, fighting, filthy homes, alcohol abuse and adults unable to take basic care of him.

He barely had any schooling and was frequently sick with ear and chest infections, nits and scabies. From a young age he began consuming alcohol and marijuana and sniffing aerosols. He was on this pathway even before birth, his mother reportedly drinking heavily during pregnancy and with a history of petrol sniffing.

His story suggests that his own parents had their struggles. And there are families across Australia with multiple generations who’ve had similar lives to Walker.

A few years ago, senior police in an Australian state showed me extensive mapping of troubled families put together by police and family services. They found a small number of families took up most police and social services resources, some over five generations; with extensive criminal histories, family violence and murder, mental health issues, drug and alcohol abuse, juvenile and adult criminal records and ­detention, and so on.

All those families’ members were known to police or family services as victims and/or perpetrators of child abuse. The saddest part was the sixth generation, aged 0 to 5, were already known to social services and police.

Don’t believe anyone who says this is caused by poverty. It’s not. I grew up in abject poverty. My siblings and I were always well cared for, our home was clean and tidy and we went to school every day. Most people I grew up with were poor and they were the same. My father and his family lived in tin and bark huts with dirt floors and the men and boys slept outside but they were also well cared for, clean and tidy and went to school every day. And in all of these families, all the adults worked.

A few key elements make almost all the difference between stable and healthy communities and those in complete dysfunction. These include adults going to work, children going to school, good early childhood care from conception, and respect for the rule of law.

All these elements are intertwined. High intergenerational welfare dependency goes hand-in-hand with all aspects of dysfunction including alcohol and substance abuse, domestic violence, and child abuse. These in turn give rise to unhealthy pregnancies and poor early childhood care, with the next generations behind before they’ve barely begun.

Communities aren’t safe if laws are routinely broken and no one does anything about it. Jobs are created by commerce, but businesses won’t set up in places where violence and property damage are rampant; nor will communities have proper services if nurses, teachers and police are not safe there.

Rickisha Robertson’s experience is a chilling account of the bashing and terrorising of an ­Aboriginal teenage girl; an experience being repeated day after day for thousands of Aboriginal women across Australia.

The 1991 Royal Commission into Aboriginal Deaths in Custody said Indigenous people are more likely to die in custody because they’re more likely to be in custody. And damaged men who can’t control their anger and who terrorise their families and communities with violence will inevitably have more encounters with police – some of which will have fatal ends.

We as a nation, as well as Indigenous communities, need to face up to the violence and dysfunction plaguing so many Indigenous families and communities across Australia and speak openly and honestly about it. Its root causes aren’t a mystery; nor the solutions. What’s missing is the will.