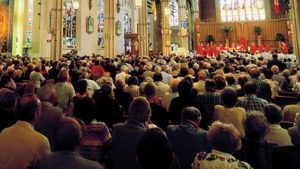 Opponents of religion say God no longer matters in our society. After all, the 2016 census did show the number of Australians reporting ‘No religion’ had gone up to over 30 per cent.

The verdict of the critics is that religion in Australia is finished. But this hasty conclusion is based solely on a decline in demand for religion.  What if we looked instead at levels of supply?

In what we can call the “religious market”, let’s think of religious believers as consumers who make rational, informed choices about which religious “product” they will opt for.

Then it’s up to religious organisations – or “suppliers” – to serve the market and meet the demands of consumers. Unpopular “products” are ditched in favour or more popular ones.

A “supply-side” analysis of the Australian religious market – and the behaviour of religious “consumers” – shows a more vibrant and robust picture of religious life in Australia.

And just like any other market place, different structures of religious markets can stimulate or stifle demand – and that, in turn, affects levels of religious participation.

The greater the competition between religious suppliers, the higher the levels of religious “consumption”: the healthier the market, the more “religious” a society is likely to be.

At first glance, the 2016 census shows that believers in Australia’s religious market area are losing out to non-believers, and that they will continue to do so.

But a closer look at the figures tells us that overall levels of religion in Australia are growing. Remember, from the census we now know that 70 per cent of us claim a religious affiliation.

Sikhs are the fastest growing religious group having grown by 74 per cent since 2011. The 2016 census showed religion in Australia to be more complex and diverse than critics allow.

Applying the tools of economics to religion yields new insights – although more supply-side analysis of religion in Australia is still needed for a more complete picture.

What is clear though is that far from diminishing in importance, religion has always been – and continues to be – a major part of our society. And that happens to matter today a lot.

First, it matters because critics of religion who advance the “secularization thesis” argue that modernisation – including scientific and technical progress – renders God redundant.

But it looks as though their conclusion may be wrong. Indeed, some countries, such as the USA, are extremely “modern” – while they also continue to be extremely religious.

Second, it matters because, given the continuing significance of religion in Australia, defending religious freedom is now more important than ever.

As we wait for the government to publish the recommendations of the Ruddock Inquiry into religious freedom, it is important to step up vital protections for this key human right.

Yet Australians face calls from religion’s opponents to restrict religious freedom by means of public policy and regulation – such as anti-discrimination laws limiting free speech.

Intended to promote ”diversity” and protect the “vulnerable” by eradicating “hate speech”, these laws actually serve to smother the free manifestation of religious belief.

Of course, marked increases in religious diversity reflecting our vibrant multicultural society will always make the management of social policy a complex task for government.

The challenge for the federal government will be to ensure that it secures adequate protections for religious liberty while balancing the views and values of all Australians.

But those protections need to be extended to all faith-based organisations – such as schools, hospitals, and welfare agencies – and not just to places of worship.

And they need to recognise the enormous contribution that religious folk make to the Australian economy by volunteering their time and talents and by donating their money.

Recent research conducted by Deloitte Access Economics suggests that the combined economic value of those contributions amounts to an astonishing $481 million.

There are few facets of society that are untouched by the influence of religion. That’s why a supply-side analysis of religion in 21st century Australia will pose important questions.

For one thing, it will emphasise the diversity of the Australian religious economy. But it will also remind us that as well as generating competition, diversity can also generate conflict.

Hence the importance of ensuring that religious belief and practice are always framed by prevailing laws and norms which secure the rights and freedoms of all Australians.

These provide the mechanisms for ensuring that when conflict arises from various competing demands based on different rights, they can be resolved quickly and clearly.

More supply-side analysis of religion in Australia is needed. But it is highly likely to show that secularist cries about the irrelevance of religion are without foundation.

Despite what religion’s critics claim, multiculturalism, and our intake of new migrants, mean that Australians who believe in God will continue to be with us for some years to come. The sun has not yet set on God.

Peter Kurti is a Senior Research Fellow in the Culture, Prosperity & Civil Society program at the Centre for Independent Studies, and the author of A Shy Hope in the Mind: Secularisation and the Diversity of Australia’s Religious Economy