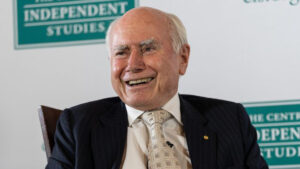 Since the outbreak of the Covid pandemic, CIS events have been generally confined to the digital platform. Over the past year, our conversations, debates and videos have attracted more than 2.1 million views, with 430,000 of these attributable to my discussion with the distinguished Washington Post conservative columnist George Will — an extraordinary number for any Australian organisation.

However, nothing beats live events in front of our valued members and supporters. So it was with great excitement that on March 3, we held our first conventional event in over a year. In front of more than 120+ guests at Sydney’s Royal Automobile Club, we marked the 25th anniversary of the election of John Howard’s government. Watch the event online or below.

On March 2, 1996, the federal Coalition defeated the Labor government in one of the biggest landslide elections in our history. Howard went on to become the nation’s second-longest serving prime minister. And his government helped set the scene for the longest economic boom since the gold rushes of the 19th century. An anniversary worth marking.

To grasp the impact of the Howard government, it is necessary to recall Australia’s condition in the early-to-mid 1990s. It was a time of Paul Keating’s “recession we had to have,” double-digit unemployment, 17 per cent interest rates, record-high budget deficits and national debt.

Fiscal discipline seemed like a lost cause while tax reform was deemed mission impossible after John Hewson lost “the unlosable election” of 1993 over the GST.  At the same time, the nation had to put up with the Maritime Union of Australia’s ideological hostility towards sensible workplace agreements. We had 2 per cent of world trade, but 25 per cent of dock disputations.

All that changed in 1996. Ably supported by several outstanding ministers – most notably Peter Costello, Alexander Downer, Peter Reith, Philip Ruddock and John Anderson (all past guests at CIS) – Howard was doggedly dedicated to using power to change Australia for the better.

Howard’s government balanced the national books, wiped out government debt, and cut taxes as it implemented a GST. Telstra was fully sold, so it could properly serve its customers and shareholders rather than those of its political masters. The Howard government also took on old-style union militancy on the wharves and delivered improved waterfront productivity and greater reliability in some of the nation’s biggest-volume container ports.

To be sure, John Howard was as given to paternalism and pork-barreling as any of his predecessors. Indeed, at various stages during the Howard years, CIS scholars — most notably Peter Saunders — subjected the government’s fiscal, welfare and family tax policies to rigorous scrutiny and criticism. It is also true Howard helped prosecute the Iraq invasion in 2003, which virtually all eminent historians and international affairs experts regard as an unmitigated disaster.

Still, during Howard’s near 12-year tenure, Australians had become a relaxed and self-confident people. Everything that should be up – income, economic growth, the stock market, the budget surplus, consumer and business confidence and living standards – was up, while everything that should be down – unemployment, inflation and (historically speaking) interest rates – was down.

For more on all this, read my Australian Financial Review column last week or listen to my ABC Radio National show dedicated to John Howard. It is also worth listening to my CIS colleague Rob Forsyth’s terrific CIS podcast with John Howard on the meaning of true liberalism.