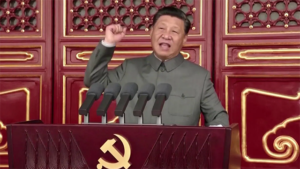 The formation of AUKUS underlines that the People’s Republic of China remains, as leading Chinese academic Zhu Feng says, a “lonely rising power”.

China’s only formal ally is North Korea, which fired a couple of ballistic missiles into the Sea of Japan while Chinese Foreign Minister Wang Yi was in Seoul on Wednesday, worrying South Korea and Japan. Wang was kept in the dark about the missiles by Pyongyang. He could only respond that China’s wayward ally was not the only country taking military initiatives and that “all of us should make an effort to the direction of resuming talks”.

Coming days after the 70th anniversary of the ANZUS Treaty, the new Australia-UK-US partnership is intended to reinforce the solidarity and strength of the forces aligned to limit China’s strategic ambitions.

The first response from a Chinese official articulated Beijing’s concerns, on which it will surely build in coming days. Washington embassy spokesman Liu Pengyu said countries “should not build exclusionary blocs targeting or harming the interests of third parties. In particular, they should shake off their Cold War mentality and ideological prejudice.”

It is understandable China would be concerned about blocs, with the exception of its own Belt and Road grouping, and about any constraint or harm to its interests. It is naturally worried about another cold war, since Soviet communism was defeated in the first.

The Chinese Communist Party has expended enormous time and effort on reviewing the collapse of the Soviet Union, which it blames on ideological failures. It is stepping up ideological education, with students of all ages required to study Xi Jinping Thought.

Nor is the party shy about the prominent role of the People’s Liberation Army. As President Xi Jinping said to rousing cheers from the 70,000 cadres invited to Tiananmen Square for the party’s centenary on July 1: “We will never allow anyone to bully, oppress or subjugate China. Anyone who dares try to do that will have their heads bashed bloody against the Great Wall of Steel forged by over 1.4 billion Chinese people.”

Such a steel wall, for the immediate future at least, likely would be built using Australian iron ore and coal. This highlights the way in which, if this is a cold war, it is like the previous one: the democratic world remains engaged economically with China.

Beijing has used its Belt and Road bloc to foster – with states that are clients rather than partners – ambivalence instead of outright opposition to its growing influence.

Thus on Tuesday Singapore Prime Minister Lee Hsien Loong “reaffirmed the longstanding ties” with China after a visit from Wang, and welcomed “China’s continued contribution in our part of the world”, pledging to work with Beijing “to build a more harmonious and peaceful world”.

Australia’s recalcitrance in this respect as a leading economic client is deeply irritating to Beijing. But the greatest threat overall to the effectiveness globally of this track is emerging from Xi himself, who is driving a relentless course towards economic self-reliance and towards state control, especially in the crucial tech sector.

Appropriately for democracies, there will be debate in all three AUKUS members about its creation. In Australia, responses that most strongly align with the PRC’s longer-term strategy include two canards: “We are just American lapdogs” and “We are being pushed by Washington into choosing between it and Beijing.”

The rhetorical sleight of hand to watch for is the absence of serious reflection on the rapid, radical remaking of a globally ambitious PRC under Xi, which is the single factor that has given birth to AUKUS. On Wednesday, Xi opened China’s National Games to a packed stadium, ordering the athletes to “struggle for the New Era” – the Xi Era.

Rowan Callick’s new analysis paper, Xi Dreams of 100 More Glorious Years for the Party: Might China Awake? is published by the Centre for Independent Studies. He is an Industry Fellow at Griffith University’s Asia Institute.