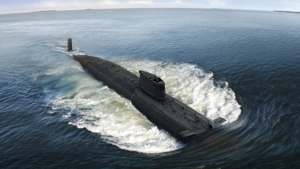 The decision by the U.S., the U.K., and Australia to establish the AUKUS security alliance continues to make serious waves in international affairs.

Under the deal, Australia will acquire nuclear powered submarines for the first time in our history. This acquisition from the United States will displace Australia’s existing agreement with the French to build 12 diesel-electric submarines in Australia.

In response to this perceived slight, France has recalled its Australian and U.S. ambassadors, and French politicians have complained bitterly in public. The French may have grounds to gripe about the way this was done, and are no doubt disappointed at the loss of tens of billions of dollars in defence procurement, but the overblown rhetoric that this is somehow “treason” is nonsense.

China is by far Australia’s biggest trading partner, accounting for almost one third of Australia’s two-way trade in goods and services. Yet Australia’s strategic interests—which are strongly aligned with the United States—are in clear conflict with China. Increasingly in recent years, Australia has felt the impact of China’s expansion of influence into Asia. China has introduced punitive tariffs on Australian wine exports, and has produced propaganda accusing Australia of committing war crimes in Afghanistan.

The bilateral relationship has deteriorated significantly.

Establishing AUKUS is the right decision for Australia, on defence and strategic grounds. A bolstered security arrangement between the U.S. and Australia in particular, centered on Australian acquisition of high capability nuclear submarines, is an appropriate response to counter Chinese aggression.

Specifically, this is a substantial response to China’s massive military build-up in recent years, not merely China’s economic coercion. When seen in this context, it is obvious that these moves don’t really have anything to do with the French—though it is unfortunate that this new pact has come at the expense of French sensibility.

The most lamentable thing is that Australia has wasted 10 years pursuing submarine options that were obviously wrong from the start. Australia currently operates six Collins class diesel subs. Although they are now operating relatively well, there were serious issues with these subs for several decades. Production was delayed, faulty, and required a number of costly redesign efforts. There were issues with the combat systems. The subs were also unacceptably noisy in early trials.

These problems hardly abated when the subs entered service. Their availability was poor, and the cost of maintenance was far higher than anticipated or budgeted. Australia also had significant difficulties recruiting and sustaining sufficient crews to operate the diesel subs.

At the height of these operations issues in 2009, it was announced that Australia would build 12 “future submarines” to replace the six Collins class when they left service. Little detail was provided about the required specifications of the new subs, just that they had to have greater range and expanded capabilities compared with the current subs. No reason was provided as to why the submarine force needed to double, though the implication was that they were needed to counter a rising China.

Although lip-service was paid to investigating existing design or off-the-shelf options, it was clear the preference was to go through a similar process to the Collins. Despite this, it took nearly a decade for a decision on the subs to actually be made. Not surprisingly, this shambolic process has led to no better outcomes this time around.

The overall cost, which was already high at nearly $40 billion AUD in 2012, was rumored to be heading towards $100 billion AUD, and the subs would likely not hit the water until the 2040s, more than a decade behind schedule. It has been clear to all sides that the deal with the French has not gone according to plan.

Of course, even in 2012, it was obvious this was not the best solution. The best solution was to partner with the U.S. and its successful Virginia class attack submarine. The problem was political. The government specified that Australia would not acquire nuclear submarines because they had to be built in a particular state in Australia.

These requirements made no sense: Australian submarines would need to transit 4,000 nautical miles to reach station in the South China Sea, beyond the typical range of diesel submarines. And once there, a diesel sub would only be able to stay a few weeks before returning.

Moreover, the future of naval engagement, much like aerospace, is clearly moving towards unmanned underwater vehicles and miniature battery-operated submarines. Future submarines are likely to act more as floating platforms than carry out individual missions. Larger nuclear submarines, with greater power output, are better suited to this task.

Then, as now, nuclear submarines clearly offer greater capabilities and meet our needs. Recent strategic developments have just made it possible to ignore the domestic politics. The French had tied their bid to basing as much submarine production in Australia as possible, clearly recognising that these domestic political considerations were driving the acquisition. As the relationship with China worsened, these domestic considerations waned in importance. So too did the attractiveness of the French submarines.

None of which is to deny the importance of France to the Asia-Pacific region, or to argue that partnership with France is undesirable. The French have strong ties to the region, and are now exploring greater alignment with India, which has its own conflicts with China. These French interests were no doubt one of the motivating factors for the Australian submarine bid in the first place; not just the juicy price tag.

But Australia must put its own interests first, and those interests clearly lie with the United States, the United Kingdom, and the acquisition of nuclear submarines.