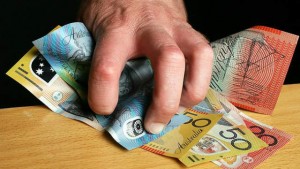 So much can be said about the 2017-18 federal budget — little of it complimentary — it’s hard to know where to start. The new bank levy seems a good place, as it encapsulates the budget’s twin themes — as perceived by me, not as advertised by the government — of unbridled revenue hunger and craven appeal to populist sentiment.

The levy is highly selective. It applies to selected liabilities (mainly borrowings and non-guaranteed deposits) of selected banks (the big four and Macquarie). It is the very antithesis of the broad, non-distorting tax we have always been told is the cornerstone of a good tax system. The rate is low, at 0.06 per cent a year, but this seemingly miniscule impost applies to such large sums that it will generate upwards of $1.5 billion a year.

This measure joins other new and increased taxes in this budget to add more than $7 billion a year to the annual tax take by 2020-21. And these discretionary increases come on top of the automatic growth of tax revenue from economic growth and inflation to produce a 31 per cent increase in the four years to 2020-21.

The budget destroys any credibility that remained in the Coalition’s claim to be a low taxing government. The truth is they are relying very heavily on taxation, as opposed to expenditure restraint, to reach the nirvana of a surplus budget.

Where did the bank levy come from? Out of the blue, it seems. It has never been recommended by any of the many reviews of the Australian tax system. There have been no green papers, white papers, exposure drafts or consultation — the usual markers of careful tax policy development.

There lies one of my concerns with the levy. The way it has come out of the blue sends a terrible message to all potential investors that they, too, could be the victims of sudden, unexpected and capricious tax policy changes in the future.

The budget papers don’t work hard to justify the levy. It is given six short paragraphs of explanation in Budget Paper 2 and less elsewhere. This hardly seems the way to introduce a major new tax. Perhaps it was a last-minute addition. Or perhaps the government felt no pressure to explain. It knows the banks are unpopular, and that alone is sufficient justification. Never mind that at least some of the levy will be passed on to bank customers.

If the government had tried harder to explain, it might have said that in 2010 the International Monetary Fund suggested such a tax in the wake of costly bank bailouts in the US and Europe. It was supposed to be a kind of insurance scheme against future bail-outs and make banks think twice about taking excessive risks. Just because the IMF says something doesn’t make it right, but its imprimatur does lend a cloak of respectability. Fourteen European countries took up the idea, including the UK (yes, it is European) under the Cameron-led Conservative government.

But the Turnbull-led government has not cited that history as providing a case for the levy. And it is just as well, because the Australian context is totally different. We have had no costly bank bail-outs and our banks are strong, well-managed and well capitalised. We are told simply that the levy ‘represents a fair additional contribution from our major banks and will assist with budget repair’. Fairness, as usual, is in the eye of the beholder. The punters don’t like the big banks and when the government can’t discipline its own spending the banks are fair game for a shake-down. It’s as simple as that.

Once the levy becomes embedded, it will be extremely difficult to remove, and is likely to grow. Even a small increase will yield a lot of extra revenue. Australian governments of the future will not be able to resist the temptation.

The UK levy, for example, was increased nine times and in the process trebled from its original level. Her Majesty’s government has now decided to scale it back, but at the same time impose a new corporate income tax surcharge on bank profits to raise more revenue than it will lose by reducing the levy. Banks will pay 8 percentage points more than other companies. This transformation seems to support the charge that it was all about general revenue raising in the first place, not about banking system reform.

The IMF’s justification for a levy on bank liabilities is open to challenge anyway. A levy creates a new distortion and throws sand into the wheels of the financial system. That’s the whole idea, they will say, but the best way to make banks more secure is to make sure they have enough capital to withstand shocks, and that is happening.

At least the Turnbull government was up-front about its revenue motive and didn’t try to hide behind the IMF’s case.