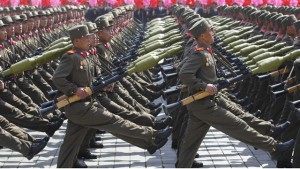 At the opening of the seventh annual United States-China Strategic and Economic Dialogue earlier this week, US Vice-President Joe Biden launched yet another diplomatic broadside against Chinese territorial aggrandisement in the disputed South China Sea.

In a thinly veiled rebuke of Chinese tactics, Biden pointedly remarked: ‘Nations that discard diplomacy and use coercion and intimidation to settle disputes … only invite instability.’

The United States deserves credit for pushing for a fair and legal resolution of the South China Sea dispute. But despite laudable US intentions, Beijing possesses a crucial advantage that will likely leave Washington unable to stop Chinese territorial ambitions: sheer force of will.

The United States still enjoys a commanding strategic advantage over China in the South China Sea and across the Asia-Pacific.

The Chinese defence budget is only roughly a third of US military outlays, and US fighting capabilities will likely remain superior to China’s for decades to come. Moreover, while US power is amplified in Asia thanks to an extensive networks of alliances and close security partnerships, China is still a ‘lonely power.’

Nevertheless, the steadfastness of China’s commitment to seizing the bulk of the contested South China Sea more than makes up for these material Chinese disadvantages.

The Chinese Communist Party (CCP) has staked its credibility on defending what it argues is China’s sovereign right to the South China Sea.

With Beijing having repeatedly emphasised that its territorial claims are indisputable, it would be politically untenable and a great national embarrassment for Beijing to now back down.

Popular opinion also tends to see China’s South China Sea claims as a core national interest and a matter of national pride. An illuminating recent analysis of the Chinese public’s attitudes found that they largely view the South China Sea dispute ‘in terms of national and personal humiliation, independently of official media cues.’

Taking control of the South China Sea is therefore not just a matter of asserting Chinese dominion over the country’s strategically valuable southern maritime approaches; it is a priority as fundamentally important as rehabilitating the dignity and stature of the ‘great Chinese nation.’

Whereas the South China Sea dispute is a central element of China’s national project, the United States has much less on the line in this contest.

In fact, expanding Chinese control of the South China Sea for the most part poses only an indirect and unlikely threat to the United States.

To be sure, Chinese territorial aggrandisement would endanger US interests if it interrupted trade flows in East Asia’s busy shipping lanes or sparked large-scale conflict between China (the most important US trading partner) and the Philippines (a US treaty ally with which the United States shares mutual defence obligations).

However, the likelihood of these eventualities is low. For more than two decades, Beijing has assiduously avoided stepping over the threshold of armed conflict with its Southeast Asian neighbours, and China has no interest in challenging freedom of commercial navigation in the South China Sea (Australia should stay out of the South China Sea).

Leaving Southeast Asian nations to lose more of the South China Sea to Chinese control would admittedly entail some immediate costs for the United States.

US global standing would take a hit and the credibility of US security guarantees would be undermined. Washington would also come under increased pressure to keep its military aircraft and vessels out of expanding Chinese-controlled corridors of the South China Sea.

Although real, these US costs are still dwarfed by the incalculable benefits Beijing believes it would derive from restoring Chinese national greatness by seizing vast tracts of the South China Sea.

China is keenly aware of how comparatively under-invested the United States is in the contest for the South China Sea, and will continue to leverage this disparity to flout US objections and expand its area of control.

Of course, Washington could mitigate this Chinese advantage by dedicating much more diplomatic energy and military might to pushing Beijing to accept an equitable and legal resolution of the South China Sea dispute.

Such a stiffening of US resolve is possible, particularly given the prospect of a more hawkish and Asia-focused Clinton administration after the 2016 presidential election.

But a changing of the US presidential guard will not neutralise the underlying disparity in the contest for the South China Sea: China is fighting for so-called ‘inherent Chinese territory,’ while the United States is defending an ideal as amorphous as the resolution of territorial disputes in accordance with the principles of the rules-based international system.

Washington’s instincts are right. International law and the liberal world order deserve to be defended in the South China Sea and around the globe.

Yet China’s deep and uncompromising commitment to regaining what it simply considers lost Chinese territory means Beijing may have already won the struggle for the South China Sea.