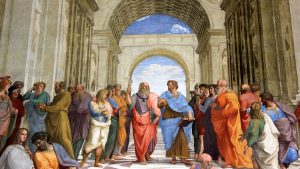 The most divisive issue in higher education bears an eminently respectable name: Ramsay. When healthcare magnate and medical philanthropist Paul Ramsay died in 2014 he left the bulk of his fortune — $3 billion — to charity.

The Paul Ramsay Foundation uses the money to support worthy causes such as suicide prevention, indigenous eye care, and child health research. It also has an education program that funds disadvantaged schools in Tasmania. And then there’s Western civ. The Ramsay Centre for Western Civilisation opened its doors with great fanfare in November 2017, with two former prime ministers (John Howard and Tony Abbott) on its board. But it has been a lightning rod for controversy, with academics throwing around wild labels such as “racist” and “white supremacist”. The Ramsay Centre even has been linked (unfairly) to the Christchurch massacre.

Appalled at seeing the Ramsay name dragged through the mud, the parent Paul Ramsay Foundation reportedly is seeking to sever ties with its troubled stepchild. It’s a sea change for the Ramsay Centre, which last year was considering bids from several NSW universities. The Australian National University beat them all to the draw, becoming the first university to enter into serious negotiations to offer a Ramsay degree — and the first to pull out.

Amid recriminations over academic freedom, the proposed curriculum and even what to call the degree, things came crashing down. Instead of launching at the world-class ANU, Ramsay has settled for a (let’s face it) second-choice agreement to fund a degree at the University of Wollongong. Maybe. The university faces a legal challenge over alleged irregularities in the process of approving the degree, and the academic senate seems to be on the side of the critics.

Meanwhile, at the University of Sydney at least seven departments have issued open letters opposing talks with Ramsay. Farther afield, the University of Queensland’s faculty and students have overwhelmingly voted down the proposed degree.

Let’s face it: the Ramsay Centre will never succeed in forcing Western civilisation down the throats of Australia’s thoroughly anti-Western humanities departments.

Clearly, it is time for a change of course. Instead of withdrawing its funding, the Paul Ramsay Foundation should ask the Ramsay Centre to focus on students, not degrees. Kids, after all, are at the heart of the foundation’s mission.

A revamped Ramsay Centre offering should avoid the big universities entirely. In the place of a full university degree program, Ramsay should commission a private education provider to offer a one-year certificate program. It could become something like a “gap year for Western civ”.

Staff, too, could be recruited nationally, or even globally, on a rotating basis. A competitive, well-funded Ramsay fellowship semester would attract the best teachers in the world. And it would keep things fresh. New people bring new ideas to a program and make new connections for its students.

Scholarships should be offered to individual Ramsay students, not doled out by their universities. Students would flock to a free education, even if it meant doing an extra Ramsay year. And universities would be happy to see their students apply for Ramsay fellowships, competing to see who could win the most Ramsay scholars each year.

Today, universities issue press releases when their students win Rhodes scholarships, despite the enormous global controversy over the troubled heritage of Cecil Rhodes. Follow the “gap year” plan, and soon they’ll be doing the same for Ramsay scholarships. High schools will advertise how many Ramsay scholarships they win every year, and newspapers will publish league tables. Crucially, no one would be involved who doesn’t want to be involved. No one would have Western civilisation rammed down their throats. Participation in the Ramsay program would be strictly a matter of personal choice.

On its present trajectory, the Ramsay Centre is going nowhere. Even if it succeeds in getting a degree program up and running, it will face protests and resistance at every turn. Shift the focus from signing up universities to signing up individual students, and there’s nothing to stop the centre from succeeding.

A “gap year for Western civ” would attach the Ramsay name to one of the most prestigious scholarship programs in the world. And the Ramsay Centre could keep control of the curriculum while recruiting leading scholars to spend a semester in Sydney. Everyone would benefit — the students most of all. Paul would be proud.

Salvatore Babones is an adjunct scholar at the Centre for Independent Studies and an associate professor at the University of Sydney.