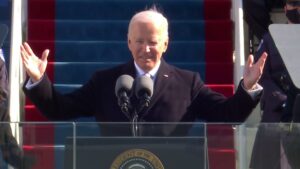 Joe Biden represents a ‘return to normalcy’ in American foreign policy, but that may mean trouble for Australia.

He has repeatedly stressed his commitment to working ‘with’ allies to achieve American goals, not made commitments ‘to’ allies to help them with their own challenges.

He comes to the presidency amid great expectations for a return to more normal American foreign policy, but that doesn’t necessarily mean a more benign international environment for Australia.

The United States has global priorities and responsibilities, but in The New President: What Biden’s foreign policy agenda means for Australia, I outline the three main areas of concern in particular where the Biden administration’s policy choices are most likely to affect Australia: China policy; climate policy; and digital platforms.

On China, Biden is more likely to seek Australian support for American policies than to offer specific help to Australia. On climate, control of Congress gives him a free hand to pursue more aggressive greenhouse gas emissions targets. And on digital platforms, Australia’s maturing plans to regulate American internet giants runs directly counter to the interests of some of Biden’s biggest campaign donors.

The big shock of Biden’s foreign policy is likely to be his administration’s strong support for Big Tech. The Australian government plans to force Google and Facebook to pay for posting news snippets, but Google and Facebook were among Biden’s biggest campaign supporters and have placed executives on his transition team.

Netflix and Disney+ are also likely to ask Biden to pressure Australia not to impose local content rules.

Australia has long benefitted from being overlooked in American policymaking. It may find itself the target of an uncomfortable amount of attention over the next four years.

Australia benefits most when it is ignored by the United States; the greatest threat to Australia is that Biden will finally give it the attention it craves.