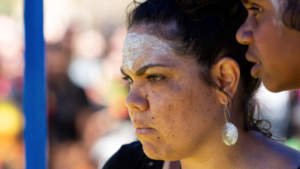 The tsunami of virtue-signallers and protesters on our news feeds and social media platforms translating the American “Black Lives Matter” (BLM) movement and police ­violence issues to Australia is shifting focus off the far bigger problems facing indigenous ­Australians.

Recent riots in the US, ­triggered by the death of George Floyd at the hands of police, have centred on the idea that racism is widespread in America, and embedded in US political and civic institutions.

Indigenous advocates have imported this narrative to Australia, focusing on indigenous deaths in custody, leading to massive protests in Australia.

While there are also good ­reasons to question the assertion of widespread racism in the American context, assuming this narrative applies wholesale in Australia is also overly simplistic.

While it is true that Aboriginal Australians are incarcerated at a disproportionately high rate (3 per cent of our whole population and yet 25 per cent of the prison population), simply blaming racism obscures the deeply problematic issues in a number of indigenous communities.

First, it is important to realise the Royal Commission into Black Deaths in Custody actually found that indigenous people are not more likely to die in custody than other Australians, when the higher incarceration rate of indigenous Australians is taken into account.

This is a point emphasised by former director of the NSW ­Bureau of Crime Statistics and ­Research Don Weatherburn in ­Arresting Incarceration: Pathways Out Of Indigenous Imprisonment.

And far from police violence being the primary cause of death in custody, the royal commission actually found natural causes were the leading factor for black deaths in custody. Suicide was also another major issue.

Worse still, activists, politicians, and ‘progressive’ commentators, who are only too quick to condemn white male perpetrators of domestic violence, too often excuse indigenous offenders on the basis of racism and colonisation.

Indeed, what activists fail to admit is that the No. 1 cause for high rates of incarceration for Aboriginal Australians is due to violent assault and acts intended to cause injury. And the primary ­victims of these assaults are other ­indigenous people.

The focus on interactions between indigenous offenders and police is obscuring the real pain of these Aboriginal children and women, who are the victims of child abuse, neglect, domestic violence and sexual assault.

Aboriginal children make up 5.9 per cent of the entire child population in Australia yet are five times more likely to be hospitalised as ­a result of assault than non-indigenous children.

Between 2007-2011, 26 per cent of all deaths among Aboriginal children aged 0-17 were a direct result of abuse ­injury — that’s three times the rate for non-indigenous children. Furthermore, the leading cause of death between 2014-2018 for Aboriginal children was suicide. This is a quarter of all child suicides in ­Australia (or 85 out of 357).

There is no evidence to suggest that systemic racism is the leading cause of suicide. However, there is overwhelming evidence that child abuse, neglect and sexual assault lead a child to want to take their own lives.

Realising that there are fundamental connections between child neglect, child sexual abuse, Aboriginal victims of crime and the high rates of incarceration will allow us to address these critical issues affectively.

While this does not, and should not, excuse police brutality and ­misconduct, addressing the causes of violence in indigenous communities — including alcohol abuse, poverty, family dysfunction, and poor health and education outcomes — would do far more to close the gap between ­indigenous Australians and the rest of the country.

Moreover, there is little doubt that this would significantly reduce indigenous incarceration and ­thereby address the concerns of local BLM advocates.

Abused children from broken homes are put on a path of destruction. They often become abusers themselves, repeating the hurt they suffered at the hands of their abusers and end up incarcerated. Or they continue the pattern of being ­victimised with the possibility of ­becoming a homicide victim.

If their lives really matter, we should be looking at the real ­problems they face.

Jacinta Nampijinpa Price is director of indigenous research at the Centre for Independent Studies and an Alice Springs town councillor.