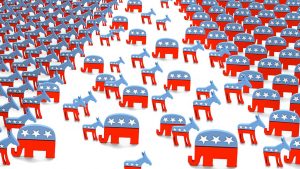 This week was the American electorate’s first opportunity to render a national verdict on Trump’s presidency. Turnout and enthusiasm were high, but the results were mixed: although the Democrats have won enough seats to regain the House of Representatives, Republicans have strengthened their hold on the Senate. The result just confirms and extends America’s current political divisions.

Nothing demonstrates the divisions better than the nature of the House and Senate races. Although his name wasn’t on the ballot, Trump tried to nationalise the midterms by running hard on import tariffs and especially tough border controls. That helped in states where Senate races were conducted. However, it backfired in House races.

Indeed, what worked for Republicans in motivating the conservative base in red states—and even a few Democrat states (such as Indiana, Missouri and North Dakota) boomeranged in urban districts where the House majority was determined. These are swing electorates in which moderate and college-educated Republicans and independents determine who wins.

There are anywhere between 30 and 40 of these seats, and they are primarily based in the suburbs of Philadelphia, Denver, northern Virginia and Miami-Dade.

Think of these seats as America’s versions of Wentworth, the inner-city Sydney seat that recently voted out the Liberals. Nativism does not resonate here. In the 2016 presidential election, Hillary Clinton carried 23 of these moderate Republican seats; and most of them—and some more—voted for the Democrats this week.

What lies ahead? First, Trump is unlikely to be fazed by these results. If anything, he may well double down on his nativist message, because it didn’t hurt the Republican campaigns across many states. And it is the states that determine the electoral-college vote, which in turn determines the presidential election.

Second, in the wake of their House victory, Democrats are likely to be more confrontational and subject Trump to more scrutiny. However, there is a danger in over-interpreting their mandate. They received none. At best, they were merely rewarded for acting as the people’s proxy in placing checks and balances on Trump’s presidency. Moreover,

Democrats lack dominant national leaders and have no clear agenda beyond bagging Trump to take into the 2020 presidential election.

Finally, get ready for Washington to become even more partisan and polarising in coming years. Robert Gates once said the ‘greatest national security threat’ to the US ‘is the two square miles that encompasses the Capitol Building and the White House’.

The former defence secretary made those remarks in 2014, well before Trump arrived on the scene. If he thought congressional gridlock and infighting was a big problem then, it is bound to become an even bigger problem during the next two years.