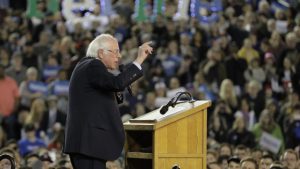 Bernie Sanders is set to become the Democrats’ choice for the White House. But his chances of selling socialism to middle America do not look good.

By rights, Donald Trump should be on the ropes. His refusal to abide by familiar US presidential decorum offends many American voters, including many college-educated Republicans in relatively affluent electorates. That’s why his party lost control of the House of Representatives in 2018.As well, Trump is only the third US leader to be impeached. That alone should make him the most vulnerable first-term US president since Jimmy Carter four decades ago.

But Trump is fighting fit. The Democrats are moving to the ideological left so dramatically that they may let the incumbent turn this year’s presidential election into a choice between his policy record (tax cuts, deregulation) that has led to a more prosperous America and the most radical US left-wing agenda in living memory.

In Australia, one of the disturbing trends of modern politics has been the Labor Party’s lurch to the left. The party of Bob Hawke and Paul Keating has supported raising government obstacles to the kind of risk-taking and hard work that allowed many Australians to climb the income ladder so rapidly.

However, compared with America’s Democratic Party, the ALP is a model of fiscal rectitude and cultural conservatism. Just look at the core policy principles that shape the front runner’s policy agenda.

Bernie Sanders wants to not just raise taxes on the middle class and increase spending programs dramatically. He also pledges to scrap private heath insurance, make university education a taxpayer entitlement and offer freehealthcare to illegal immigrants. On China, Sanders and most Democrats are more hostile towards Chinese trade mercantilism than Trump. According to Sanders, America is a “racist society from top to bottom”. (Imagine Albo saying that about Australia!)On climate, Democrats want to expand government controls of energy production and ban fracking, which has helped make America energy independent and more energy efficient. Whereas the ALP supports a net zero carbon emissions target for 2050, the Democrats’ Green New Dealwould require that the US be carbon neutral within a decade.

Perhaps Trump’s polarising populism on the right has inspired its counterpart on the left.

Such a policy agenda can no longer be dismissed as a radical initiative confined to the far left of America’s intelligentsia. It reflects the thoughts and attitudes of the party of John F. Kennedy and Bill Clinton.Sanders’ smashing victory in the Nevada caucuses after his success in Iowa and New Hampshire means the self-identified democratic socialist is now favoured to win the Democratic presidential nomination.In a plural race, the 78-year-old Vermont senator, who has not even belonged to the party of FDR and JFK, has staying power even if most Democratic primary voters prefer one of his rivals.

All this is a reminder of another political outsider taking on moderate establishment candidates. Four years ago, Trump exploited a splintered field by resonating with the party faithful. As a result, he took similar pluralities all the way to the Republican nomination and the presidency.

However, Sanders’ road to the White House will be even rockier than Trump’s path in 2016, for one main reason: socialism.

What accounts for the leftward lurch of the Democrats? America’s great recession of 2008-09 allowed many of the party’s rank and file, especially Millennials, to blame free-market capitalism for the financial crash. (Never mind imprudent housing loans, too low interest rates, failed government regulation.)

Perhaps Trump’s polarising populism on the right has inspired its counterpart on the left, which means “woke” progressives have been able to exploit grievances better than more mainstream centre-left candidates. Add to this the rise of left-wing intolerance on university campuses, and it is no wonder increasing numbers of Democratic politicians bend to identity politics, which divides people by race, religion, class and gender.

Whatever the cause, socialism is resurgent on America’s left and Sanders is vulnerable. True, in a closely divided nation, November’s election is likely to be closer than, say, Boris Johnson’s landslide over socialist Jeremy Corbyn last December or Richard Nixon’s rout of the far-left anti-war activist George McGovern in 1972. In a two-way contest with Trump, the media class and the Democratic establishment will rally behind Sanders.

But the socialist firebrand needs another financial crisis or a sharp economic downturn to help his prospects. He describes America in 2020 as a bleak house for everyone but the very rich. And by calling for government control of ever-larger chunks of the private American economy, he will resonate with enthusiastic party activists and younger Americans, who polls show unashamedly embrace socialism in large numbers.

However, in an era of full employment, sharemarket boom and rising wages among working Americans, the broader electorate won’t embrace socialism. No wonder Trump is favourite to be re-elected in November.