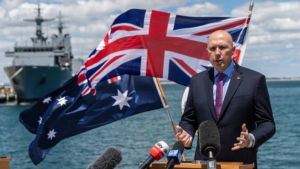 Seemingly out of nowhere, defence has emerged as a key election issue. Of course, focus on defence procurement and spending has been growing for a number of years. It began with the decided cooling of relations with China, then was supercharged by Putin’s naked aggression in the Ukraine.

Unfortunately Australia’s defence capabilities — particularly current and future procurement projects — are looking decidedly subpar. The numerous difficulties of the F35 Joint Strike Fighter have been well-publicised, for example. As have problems with the Future Frigate Program.

It’s not that Australia has neglected its defence force over the years — at least not to the extent of some continental European countries. But political focus and goodwill have not translated into useable capabilities.

Anthony Albanese correctly identified one reason: too much focus has been given to defence announcements, with too little follow through. He is incorrect that this flaw is limited to the Coalition, especially if you also consider the actions of past and present Labor state governments.

Indeed, both sides of politics are guilty of using defence for political point-scoring at the expense of capability development. For example, Kevin Rudd’s 2009 Defence White Paper projected a significant increase in defence capability out to 2030.

However, Rudd’s White Paper built on two flaws that have continued to manifest themselves in the 13 years since its release: no real plan was made for how to build and fund the expansion in capability; and too much focus was given to domestic industry considerations (especially in South Australia).

It was Rudd’s White Paper that introduced the Future Submarine Project that continues to bedevil politicians to this day. The White Paper requirements boiled down to ‘12 subs, can’t be nuclear, must be built in Adelaide’.

Everyone knew this would be extremely difficult. At the time, the Collins Class submarines were performing significantly below expectations. Maintenance was late and costly, and availability was way down. It wasn’t until after the 2012 Coles Review that these issues even began to be rectified.

Moreover, a 2011 RAND Corporation study confirmed that Australia did not have the skills to design and build a submarine. This meant we would have to build the capability before actually building the submarines; making cost and timing blowouts all but certain.

In addition, by ruling out nuclear submarines — mostly because they couldn’t be built in Adelaide and were politically risky — Australia had committed itself to a second (or third) best solution.

Yet, despite this known and enormous challenge, little or nothing was done under either Labor or the Coalition for years.

Indeed, a cynic might suggest that Malcolm Turnbull only finally got more serious about the process in order to win support for his leadership challenge from his South Australian colleagues. It is perhaps unsurprising that one of the key considerations for the final selection of a partner for the submarine build was the amount of work promised to Australian companies.

The decision to break with the initial project requirements and finally consider nuclear submarines may have been 10 years late, but it was one of the first good decisions in the history of the project.

Yet some have observed that changing course at this stage, especially to a completely different propulsion system, will delay the build even longer.

Australia may have had limited capability to design and build a diesel submarine, but it has no capability to build a nuclear one. Not to mention the need to recruit and train crews, and build and staff maintenance facilities.

This is undeniably correct. Australia almost certainly cannot design and build a nuclear submarine. So why try? Let’s fold our requirements into the United States supply chain by leasing US-built subs, so we can focus on maintenance and crew recruitment and training.

This will get Australian nuclear submarines in water up to a decade faster than otherwise.

This seems heretical only because of the continued misbelief that defence spending must also function as quasi-industry assistance.

Even when security conditions are benign, this is a bad idea. Given our current security and fiscal challenges, it is a luxury we simply cannot afford. We need the best equipment we can get, at the lowest price we can get.

Unfortunately, neither party has been willing to confront this reality. On the contrary, both are doubling down on ‘investment’ in local industry. Albanese’s Lowy Institute speech specifically outlined the need to shore up our economic self-reliance through Labor’s industry hand-out slush fund (aka Future Made in Australia plan).

The Coalition government, willing to wear the opprobrium of ending the French diesel submarine partnership, also continues to insist we will build the nuclear submarines in Adelaide.

In some respects, the problems in defence are merely symptomatic of a bigger problem. There is an almost total disregard of the outcomes from government spending in both the media and the political sphere.

So it’s somewhat unfortunate that defence has become a probable election issue at such a crucial time. Neither party is likely to have the courage to abandon its political-centred approach for one that would deliver the best defence capability.

A shift away from ‘investments’ to outcomes would undoubtedly deliver a better result.