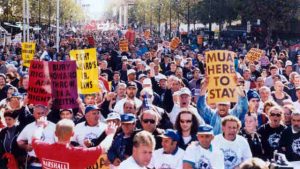 It is almost exactly 20 years since the epic waterfront dispute. Even at this distance in time, the details of one of the most dramatic episodes in Australian economic history are still in some respects mysterious. Remember the secretly trained non-union labour in Dubai, the balaclava-clad guards, the large snarling dogs?

In essence, the story was clear enough. For decades, Australia had put up with the Maritime Union of Australia’s industrial relations intransigence and its ideological hostility towards sensible workplace arrangements.

As a result, the waterfront union was able to secure significant economic rents for itself. These rents came in the form of high pay, overmanning and an array of restrictive work practices designed to maximise waterfront workers’ earnings while minimising their work effort.

The rorts had been so pervasive that wharfies were getting paid 50 per cent more than battling shift-worker police and nurses. Australia had 2 per cent of world trade, John Howard later recalled, but 25 per cent of dock disputations.

And so on April 8, 1998 the executive chairman of Patrick stevedoring, Chris Corrigan, decided enough was enough. With strong support from the National Farmers’ Federation, he courageously took on the MUA by locking out its recalcitrant workforce of 1400 and replacing it with new workers eager to do a fair day’s work for more than a fair day’s pay.

The union movement ran a textbook scare campaign, portraying Corrigan and the federal workplace relations minister, Peter Reith, as ideologues and extremists. ACTU leader Bill Kelty indulged in the left’s wonderful talent for gross overstatement when he compared the waterfront dispute to the Nazi Holocaust. Meanwhile, the MUA and its media mates made (unproven) allegations of collusion between Canberra and Patrick stevedores.

But for all the talk that the Howard government was bent on crushing the union, the purpose of reform was to improve waterfront productivity.

Although the MUA won a few legal victories that enabled it to preserve its labour monopoly, the union agreed to cut overmanning and featherbedding on the docks. That delivered improved labour productivity, faster ship turnaround times and greater reliability in some of the nation’s biggest-volume container ports. Crane rates quickly met the government benchmark of 25 lifts an hour, up from 17 in 1997.

The waterfront was never the same again. No longer were Australia’s ports a chokepoint exploited by a labour monopoly to reward inefficiency. Instead, they became a competitive link of the transport chain so crucial for an exporting nation.

The hero was Reith, who is recovering from a stroke he suffered a year ago.  His remarkable achievements have yet to be fully recognised, and to understand the magnitude of what he did was perhaps necessary to have lived through Australia at the time.

The conventional wisdom was that nothing could be done to boost waterfront efficiency. It was accepted that it was impossible to take on the entrenched bottleneck of the MUA. But then – along came Reith.

During his five-year stint as workplace relations minister (1996-2001), he had shown courage and principle in staring down the last gasps of old-style Australian union militancy. It is unlikely Patrick could have followed its reform push without Reith’s clear public support, his workplace agreements of 1996 and his strengthening of the legal prohibitions against secondary boycotts.

Reith’s reward was to be trashed and ridiculed, even though polls showed strong public support for cracking down on rorts on the wharves. During the docks dispute, he received death threats. And yet he had been good-natured in the face of adversity and he cracked jokes.

In hindsight, the docks dispute represented the sort of cathartic reformist event that laid the foundations of the Howard government’s longevity. Indeed, for Reith and Howard, the 1998 victory on the wharves is comparable to Margaret Thatcher’s campaign to smash a strike of coal miners who sought to hobble the British economy in 1984 or Ronald Reagan’s decision to fire all of America’s air-traffic controllers who had defied him by going on strike in 1981.

Reith was a partisan Liberal, but he came from a generation that cared about sound policy, not just winning elections. His influence sprang from the power of his ideas, and from the enthusiasm with which he spread them. If only there were more of Reith’s ilk in Canberra today.

Tom Switzer, executive director of the Centre for Independent Studies in Sydney, was an opinion editor at The Australian Financial Review during the waterfront dispute.