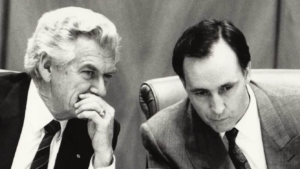 Since federation, the economic governance of Australia can be conveniently divided into three contrasting periods. Phase one, which featured industry protection and centralised wage determination, lasted from 1901 to 1983. During these years, the state was dominant in almost every corner of life and the economy was characterised by periodic crises triggered by external shocks.

Although the Liberals were in power during much of the post-war era (1949-72, 1975-83), Australia was closer to socialism than capitalism. From Ben Chifley to Malcolm Fraser, every prime minister accepted the power of the state to manage the economy.

This model began to fray in the 1970s and collapsed in the mid-1980s when we experienced the currency and balance-of-payments crises. Australia, as then-treasurer Paul Keating warned, could become a “banana republic”.

Australia was only saved from this fate by Bob Hawke’s Labor government. Showing political courage, he created a new economic orthodoxy, which liberated market forces, privatised state entities and opened up our protected economy.

It was a Nixon-in-China moment: when a political leader defies expectations by doing something that would anger his supporters if taken by someone without his credentials. In this case, the former union leader upset Labor’s old socialist guard while winning support from conservatives, led by the likes of John Howard.

The result was two decades of productivity-enhancing reform and, from the early 1990s, almost 30 years of growth with low inflation, low unemployment and, according to the Productivity Commission, no great widening in inequality.

Tragically, this second phase of economic governance ended during the global financial crisis of 2008-09. “Neoliberalism” had come to an end, declared Kevin Rudd, and social democracy would save global capitalism.

Ever since, Labor and Coalition governments have rested on the windfall of our China boom and settled into the complacency of prosperity. The result: productivity slowdown, wage stagnation and record-high household debt as the growth of government spending continued.

Australians have become used to relatively benign economic growth stretching over the decades. Now, thanks to the coronavirus crisis, we have entered a new and dangerous environment. Even on the more optimistic forecasts, a lot of Australians are going to nurse losses in jobs, businesses and hopes and dreams.

What now? What should define phase four of our economic governance?

Alas, crises can produce worse policy, and nowhere is that as true as with the growing calls for massive state intervention in the post-COVID economy. The left welcomes the birth of a new permanent era of government activism while some on the right proclaim the end of free trade and globalisation.

What passes for the new zeitgeist grimly echoes Ronald Reagan’s quip about government: “If it moves, tax it. If it keeps moving, regulate it. And if it stops moving, subsidise it.”

However, although relief in a crisis is a proper role of government, there should be no ideological validation from the radical, albeit temporary, emergency measures designed to save lives. There is no crisis of capitalism, but there is a liquidity crisis that has been caused by the decision of governments to shut down most commerce to stop the spread of a virus.

Higher levels of government intervention will only lead to sclerosis, the raising of taxes, the suppression of enterprise and unsustainable debt. Higher levels of protection will just increase prices of imported goods and risk drawing us into a slump of the sort that what was experienced in the 1930s.

Australians don’t think in terms of big or small government: we are instead a practical people who just want the state to act as a fair umpire that promotes individual freedom without creating an unacceptable level of insecurity. We also know there is a long-run cost to dependency on the state, including an aversion to risk that boosts entrepreneurial spirit necessary for innovation and prosperity.

If Canberra addressed the fundamentals of taxation, spending, regulations, education and the workplace, it would put in place the sound bases from which a long-lasting recovery is possible, not merely a short-term bounce out of the abyss.

But can Scott Morrison do a Bob Hawke and implement a reform agenda that removes obstacles to growth? Can Josh Frydenberg do a Peter Costello and embark on budget repair? And, crucially, can the opposition give bipartisan support to a new reform agenda, just as the Coalition did in the reform heyday in the ’80s? The answers will determine how we get out of this crisis.