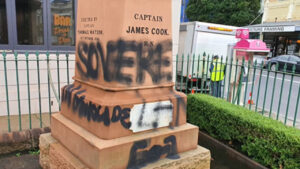 Much of history is a story of unintended consequences. What began as a protest at the brutal treatment Minneapolis police meted out to George Floyd has turned into an international movement, hijacked by manipulative people – more often than not white – who appear for the most part to be experienced anarchists. They are seeking to impose their values and political ideas on the rest of society.

We don’t doubt that those involved in the movement genuinely oppose the evils of racism. America, after all, has a toxic history, not just because slavery ended there less than 160 years ago, but because African Americans won full civil rights only in the mid-1960s. It’s just that the fully justified desire to end police brutality in America can only be clouded by aggressive acts of vandalism and violence.

For too many of the present protesters, opposition is not an end in itself, but rather the means to a greater end: the reordering of a political and social settlement accepted by the vast majority of people in Western nations. For example, the anti-fascist movement Antifa makes no secret of the fact that it wants to redesign American society according to its own recipe of proto-Marxism, identity politics and anarchism.

What these protesters lack in numbers they make up for in noise and intimidation. As a result, they attract media attention.

However, it is not just the present and the future that these anarchists propose to change. Like Pol Pot, with his Year Zero, or Mao Zedong and his Cultural Revolution, they wish to change the past.

In university history departments across the Western world in the last decade or so, there has been a determination to “decolonise the curriculum”. This is an approach that politicises the subject by imposing a Marxist slant on it. Far from paying attention to the main facts of history, it concentrates on imposing the “woke” values of a noisy, self-advertising minority on a very different past.

Without attempting to understand the dynamics of the 19th century, these demonstrators want to remove evidence of imperialism and imperialists. In Britain, the Black Lives Matter leaders also direct their guns at capitalism, and it is a short step from there to a movement for anarchy.

Context is irrelevant to these people: historical figures who had attitudes or performed deeds of which today’s society rightly disapprove are to be vilified and despised, with no quarter given. That is why statues and monuments are being ripped down or defaced around the world. For these people, the purpose of history is not to seek the truth, but to deploy it as a weapon – however crude and distorted – to manipulate the present.

It doesn’t matter how you dress this act up: it is the imposition of the views of a minority of agitators on the rest of society without any attempt at consultation or respect for democracy. Then again, the whole point of being an anarchist is to reject democracy and to seize any excuse to attack manifestations of the establishment – whether they are statues, other monuments or police officers.

Just look at some of the statues that have been attacked. Winston Churchill, who fought against fascism at a moment when Britain could have gone under the Nazi jackboot, had “racist” daubed on his statue in London’s Parliament Square.

In Ballarat, busts of John Howard and Tony Abbott were vandalised with red paint, which suggests that monuments to anyone who failed to advocate leftist politics is now fair game.

In light of that, it is perhaps inevitable that Sydney’s Captain Cook statue should become a target. Australia has certainly had distasteful episodes in its treatment of our Indigenous people, especially in the 19th century. But our nation, admirable by almost every international standard, only exists because of James Cook.

Colonisation of Australia’s land mass was inevitable, and as Howard has all too often argued, British settlement was a far better outcome than other possibilities. Think of the English language, rule of law, representative democracy, a free press and a market economy. Context is everything.

Defacing the statue of Cook will make no difference whatsoever to the plight of Aboriginal Australians. How would eliminating Cook from our history reduce the rates of family violence, youth suicide, drug and alcohol abuse, welfare dependence and incarceration in Indigenous communities?

History cannot be undone; its legacies are in every society, everywhere. Censoring the past – by removing statues, or stopping the showing of Gone with the Wind or even an episode of Fawlty Towers – only makes a proper comprehension of history (and what the past was really like) impossible to grasp.

To us, much of history was horrible, but it is why Western society is as it is. Removing evidence of that history is the construction of an alternative reality. It is not reality itself.