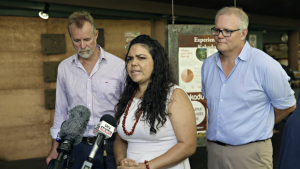 This week the Prime Minister delivered the latest (not) Closing the Gapreport, which again shows how little progress has been made in the 12 years since the “Gap” targets and process started.

Nor is the Mabo land rights test – which is ultimately about whether particular residual land rights had been extinguished – an appropriate test of said indigeneity.

It has other problems as well, which should have been obvious given the High Court itself did not determine whether Daniel Love, one of the men facing deportation, is in fact Indigenous.

However, this did not stop the court determining that, as if by osmosis, a person who claims to be Aboriginal or has a single Aboriginal ancestor somewhere in the family tree has a deep spiritual connection to Australia as a land mass.

These decisions and policies are supposedly aimed at upholding the rights of Indigenous Australians and improving their lives. So far all that has transpired is a struggle for power within Indigenous communities, further complications, and further division of the nation along racial lines.

The issue is one of sovereignty, but in the deepest sense of the word: the fusion of authority and ownership on the one hand with responsibility and accountability on the other.

The Uluru Statement from the Heart asserts Indigenous sovereignty co-exists with the sovereignty of the Crown.

Justice Stephen Gageler argued that “Australian courts … have consistently rejected the existence of Aboriginal or Torres Strait Islander sovereignty”. Chief Justice Susan Kiefel concurred, in her dissenting opinion claiming the effect of this decision is “to attribute to the group the kind of sovereignty which was implicitly rejected by Mabo … and expressly rejected in subsequent cases.”

This judgment opens the door to a separate Indigenous sovereignty at law.

Yet Indigenous people already have sovereignty. Sovereignty ultimately lies with the people of Australia, a group that includes Indigenous Australians. That sovereignty is manifested in electing a Parliament and a government who will act in the name of the Crown, in accordance with the rule of law under the careful watch of the High Court.

This is the biggest error in the High Court judgment. To the extent that Indigenous sovereignty can co-exist with the sovereignty of the Australian people – and it’s not at all clear that it does or should – it can only be the choice of the people that makes it so.

Sovereignty is not a gift the High Court has to give. The court made a decision that should have been made by the people of Australia.

As the Chief Justice said in closing, her statement of dissent that the source of the new rights “bear[s] the characteristics of a higher principle of which natural law might conceive. But such conceptions are … regarded by some as antithetical to the judicial function since they involve an appeal to the personal philosophy or preferences of judges.”

There is a growing concern in the wider Australian community about this push towards creating separate rights and special benefits for Aboriginal Australians, unequal to those of other Australians.

The government should be very hesitant to endorse further moves towards Indigenous separatism. Especially to the extent it will reduce responsibility for falling outcomes and accountability for those spending taxpayer dollars.

To accept the claim that Indigenous people are not represented at the table when decisions are being made is to ignore the sovereignty they have as Australian citizens. On the contrary, progress towards closing the gap requires us to reject the idea that different standards and expectations should apply to Indigenous communities.