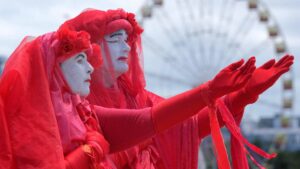 I used to be an optimist about the world but now I am depressed. When I was born in the early 1970s, the popular wisdom warned that, unless prompt and drastic action was taken to limit population and industrial growth and to end nuclear weapons, the world would face disaster by the end of the 20th century.

Yet population growth estimates declined. Biotechnology advances found ways to slash global poverty. The Cold War, as far as the US and Soviet Union were concerned, turned out to be “the long peace” (as historian John Lewis Gaddis called it).

For the past 30 years – which is to say all my adult life – the world witnessed unprecedented peace and prosperity. By any measure – poverty, sanitation, malnutrition, literacy, security, child labour, infant mortality, personal freedom – life had improved dramatically for the vast majority of humans all across the world. In 1900, average life expectancy globally was about 30 years; today it is about 70.

True, the post-September 11 wars on terror across the broader Middle East were self-defeating. But more people died in conflicts across the Persian Gulf in the ’80s. And no world war has been fought in more than 75 years.

Four decades ago, Australia was economically insular, weighed down by protectionism, industrial unrest and chronic inflation. By embracing market reforms, Labor and Coalition governments from 1983 to 2007 transformed the way we did business. From the interventionist mindset that delivered turmoil in the ’70s, “the poor white trash of Asia”, as Lee Kuan Yew once dubbed us, moved to an era of sounder policy and more durable prosperity. As a result, Australia weathered the global financial storm of 2008-09.

However, there are good reasons to be distressed about the state of today’s world and Australia’s place in it. We are besieged by crises on several fronts and they are magnified by a deep sense of malaise that grips the national psyche. Here are four of them:

The first crisis, obviously, is the once-in-a-century pandemic that shows no signs of abating. The virus has killed more than five million people around the world. And the lockdowns, restrictions and border closures cause anxiety and even depression among so many usually free people. The prospects of any relief from this madness are bleak.

Nor are the bad Covid times only health and mental. Economically, we face a dire outlook.

As a consequence of the colossal rise in borrowing and the additional money pumped into debt-ridden economies to fight the virus, rising inflation – a “hidden tax” on goods and services, as the great Milton Friedman called it – will lead to higher interest rates and more intergenerational inequality.

What is truly sad is that the electorates so happy with the magic money tree seem oblivious that the costs will continue to be paid by their grandchildren. But it is not only the wealthy who end up footing the tax bill: it will be everyone.

The second crisis has been the inflammation of “cancel culture” – the phenomenon by which anyone in public life, the media or academe runs afoul of the extreme leftist orthodoxies of a militant and vocal minority.

At the same time, the prosecution of identity politics, which seeks to divide people into gender and racial groups, just further divides society.

No rational person can dispute the destructive effects of prejudice on individuals and society: all nations have episodes in their past that today we rightly condemn. But the activists in charge of cancel culture look for racism and sexism today where often there is none.

If the cancellers strangle debate, they will suppress ideas and seek to standardise opinion, and future generations will come to regard free speech as dispensable and Western liberal values as inherently bad. As a result of this toxic polarisation of public discourse, sound policymaking will be even more difficult.

Third, Western leaders are hellbent on reaching net-zero emissions within three decades – a radical shift from cheap and reliable coal, gas and oil to expensive and unreliable renewables.

The world today depends on fossil fuels for about 80 per cent of its energy. And in the next decade, government budgets promoting the energy transition will be constrained by the heavy debt burden raised during Covid.

The process of decarbonising the economy is not a cost-free exercise – especially when the developing world, led by the most populated nations, needs fossil fuels to grow their economies and reduce poverty. By weakening the economies of the West, net zero is a boost to an expansionist China, which we can safely assume won’t power its aircraft carriers with renewables.

The cold hard reality, as Nigel Lawson often argues, is that wind and solar sources, sans a massive technological breakthrough, just aren’t up to the job of powering the world’s economies. Fossil fuels may well be damaging to the health of the planet, but the retreat from nuclear was shortsighted in nations that lacked viable alternatives. Could a European winter crisis be a harbinger of energy doom?

The final great challenge is geopolitical: the strategic and economic competition between the two great nuclear powers, China and the US, is likely to be the defining feature of international relations in coming decades and it’s mainly going to take place in our neighbourhood.

The Covid crisis has coincided with not only the ruthless centralisation of Xi Jinping’s power but also the expansion of the communist giant’s global footprint. Canberra rightly has stressed the importance not only of pushing back at against so-called wolf warrior diplomacy – where Beijing uses its economic heft to coerce or harm weaker, smaller states that pursue policies not to the Chinese Communist Party’s liking – but also deepening ties with other regional nations highly anxious about China’s rise.

Because Australia lived for so long in a post-Cold War world that was dominated by our closest ally and because East Asia was so peaceful during that period, we came to think it was forever. It was hard to imagine great-power rivalry ever returning to our region.

But that world has gone away, mainly because of the rise of China, which (with the benefit of hindsight) we helped fuel.

All this comes as the US, our most important security partner since 1942, remains distracted by less strategically important regions: Europe and the Persian Gulf. Meanwhile, Washington is frighteningly polarised and deeply divided. Public confidence in virtually every major US institution – from religion and the courts to the media and the military/intelligence complex – has collapsed. The standard of leadership – from Donald Trump and Sarah Palin to Joe Biden and Kamala Harris – is a shocking sign of America’s political and intellectual bankruptcy.

It is for these reasons one must recognise that we face very dark times. Historical cycles come and go. After something of a golden age in recent decades, our future looks borderline apocalyptic.