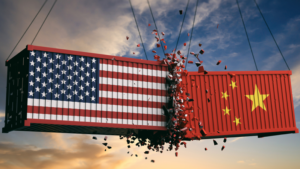 The world’s two major powers are wrestling for strategic advantage in an increasingly bitter contest to determine which of them will be the pre-eminent state of the 21st century.

No matter how cleverly spun, a trade deal is not going to get the relationship back on track because both countries have moved from a framework of cooperation to one of open rivalry and strategic competition.

Preventing, or mitigating, worst case outcomes will require the US and China to accommodate each other’s strategic interests. This won’t be easy because of diminished trust, their different world views, the systemic nature of their confrontation and domestic politics.

A second Cold War could be worse than the first, given the interdependence of the US and Chinese economies, their centrality to global prosperity and the proliferation of dangerous military and digital technologies.

A managed decoupling is necessary to preserve the integrity of an open, robust trading system and a liberal international order.

Avoiding a Cold War will require the US and China to strengthen, not reduce, the many areas of cooperation that once bound them, dampen down their hostile rhetoric and get serious about conducting a whole-of-relationship dialogue to identify pathways for managing strategic risk.

The US and China also need to support — and preferably lead — reform of the WTO. Despite its inadequacies, it would be better to fix the WTO’s problems by building consensus for reform among its members rather than leave the organisation or worsen its near-paralysis.

As they have done in the past, the two superpowers must use the existing multilateral architecture to help resolve their disputes. Should they be unwilling to embrace international cooperation, middle powers should step up.

Both countries should draw upon their resident diplomatic expertise and the wider international community to develop a fit-for-purpose suite of Confidence Building Measures to build trust and make their intentions and behaviour more calculable and predictable — and incorporate those into a broader, proactive approach to conflict management known as Preventive Diplomacy.

Of the available choices, managed decoupling is most likely to achieve mutually acceptable trade outcomes without losing 70 years of trade benefits.