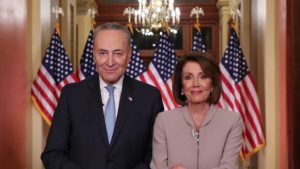 As the token American at CIS, I was shocked to hear of the divide occurring back in the States. Two great sides that stood together for years, working together as one while bringing millions of Americans opportunity, jobs, and hope.

Now, the two sides are unravelling before our eyes… I truly wish Jeff and MacKenzie Bezos all the best in these trying times, and hope they both can find happiness once again.

It brings no joy hearing of a power couple’s decision to split after years of love and support. However, in life people grow apart and I hope the pair decide to act like grown adults and hold no grudges.

On the other hand, that’s far more than I could expect from Washington in the 26th day of the government shutdown. Behind this power couple of Democrats and Republicans, the country is whispering to each other “see … I told you they wouldn’t last!”

The signs were always there. The two could never say anything nice about the other, together maxed out the family credit cards, took out trillions in foreign payday loans, pitted the kids against the other parent by buying them off, then blamed the Russian, Chinese, and Mexican neighbours for all their personal problems.

And while unable to solve their household wrangling — but still having the audacity to tell Americans how to live their lives — they then shut the whole thing down over a .0002% increase in debt.

But as they say, if you want a quick lesson in relationships, spend a few days in Family Law Court. The US has now been there for nearly a month, so the least we can do is learn from this debacle and turn it into some future good.

Americans are now realising many of the federal government’s ‘necessary’ roles are… err, not. States, communities, and non-profits are picking up the responsibilities like protecting national parks and providing multiple gaps in local services.

Washington seems astounded to discover that local communities value their neighbourhoods more than the bureaucracy does.

Years of debt, regular budget increases, and unnecessary hiring culminated in a moment when the government finally stopped — and only the bureaucrats were in tears.

Had Amazon shut down, things would have gotten real. Shuttering the largest company in the world, valued at $1 trillion, would have caused widespread panic. But an organization with a combined $21 trillion in debt alone… meh.

The relationship as it stands in Washington is broken, the media has turned into tabloids reporting only on wedge issues, and politicians are in the capital to control the rest of the country, not represent their constituency.

In the US, states and communities were ready to take back responsibility from the feds. If something similar happened in Australia — with our increasing deficit and nanny state regulations — how would we fare?