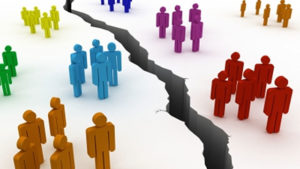 The controversial University of Melbourne dance performance, Where We Stand, is an insight into kind of divided society we will become if identity politics is allowed to split the nation up into competing racial tribes.

By seeking to remind us that non-whites have been excluded from society and history, the political message being sent is that Australia remains a racist country in which racial privilege and prejudice determine outcomes in life.

What this really shows is how the kind of identity politics our politically-correct schools and universities incessantly preach to young Australians, creates fabrications that belie the diverse and tolerant society Australia is today.

There has never been less racism, despite the grievance-mongering claims made by Where We Stand — which epitomises the way identity politics misrepresents our history of successfully eradicating the racism that once blighted Australian society.

A century ago, Australia was certainly a country in which race determined destiny.  Racial prejudices were so ingrained that the makers of the White Australia Policy felt that excluding non-whites was the only way to create an egalitarian nation.

The success of our non-discriminatory immigration program, and the transformation of Australia into one of the most harmonious multi-racial nations in the world, has only been possible because the old prejudices have been overcome and replaced by the willingness of the vast majority of Australians to extend the ‘fair go’ to all comers; regardless of racial background.

Absurd as it is, we should not downplay the threat identity politics poses to social harmony. The claim that the persistence of white privilege justifies special rights and status for certain racial groups, is a recipe for generating a backlash from those accused of holding privileges and prejudices they do not.

The best way to ensure that new age racism does not divide us is to simply tell the truth about our history and about the great changes that have occurred in Australian attitudes to race.