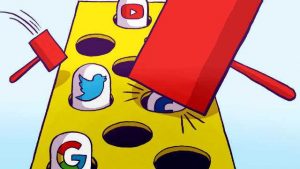 To be clear, this push goes far beyond just preventing terrorists from having a platform to spread their ideas. ‘Regulate the internet’ is pushed as the solution to the radicalisation of disaffected youth, the dissemination of hate speech online, sexist and derogatory abuse towards women on social media, even the spread of ‘fake news’.

However, making Facebook, Google and Twitter morally (or even legally) culpable on the basis they failed to prevent the bad behaviour of a minority of users is wrong.

For a start, it lets the actual perpetrators of these heinous acts — and those who cheer on their efforts — off the hook.

Social media allows people to interact with one another. So much like all places where people have congregated throughout history, some of those interactions are positive, some are negative, and some of them are criminal.

The harmful acts are solely the responsibility of the perpetrators. There can be no moral equivalence between creating a space that can be misused to commit violence, or not policing this space quickly enough, and committing violence.

However, if we want the digital public square to be a place of freedom and global connectivity — and there is no question that we should want this — we cannot expect platforms to pre-vet all content before publication.

We cannot expect them to prevent users from sharing objectionable content at all. To do so would undermine their primary purpose; probably fatally.

This is an edited extract of an opinion piece published in the Australian Financial Review.