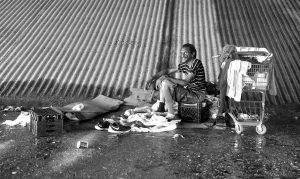 It’s more than a year since the infamous Martin Place tent city was dismantled, but we are no closer to addressing the real causes of genuine homelessness.

Unfortunately, the debate about homelessness is being distorted by dubious official statistics that exaggerate the extent of the problem, and obscure the urgent need for governments to implement the real solutions required to help the genuinely homeless people exit the streets.

According to the Australian Bureau of Statistics, there are more than 100,000 ‘officially’ homeless people. But the figures are based on a flawed definition of that includes the ‘housed homeless’ such as people already living in supported accommodation, and other groups who live in crowded dwellings but would not consider themselves homeless.

At the 2016 census, only 7% (8200) of the ‘officially homeless’ met the average Australian’s understanding of the term: a person who sleeps rough, and usually on the streets.

But homelessness services have proved unable to stem the rising numbers of rough sleepers due to a misplaced fear of violating the ‘rights’ of the rough sleepers and disrupting the homeless ‘culture’.

Ideology is trumping reality. To expect the most severely homeless — who often suffer major mental health and substance abuse problems — to seek help if left to their own devices ignores our duty of care to help the most vulnerable in society who cannot look after themselves.

And without help, they will continue to suffer extreme — and eventually fatal — ill-health, disease, mental disorders and debilitating addictions.

If we truly want to reduce genuine homelessness — and prevent the wide range of health, social, and physical harms ‘rough sleepers’ experience — we must be prepared to intervene with real help, rather than letting them slide further and faster into illness and inevitable death.

Mandatory drug treatment must also be expanded for the homeless, and for those at high risk of homelessness, to assist with maintaining stable accommodation and avoid evictions from public housing.

We also need to reconsider the impact of deinstitutionalisation over the past 30 years. Long-term care facilities offering high levels of support would benefit the chronically homeless and gravely ill people who will otherwise continue to live and die on the streets ‘with their rights on’.

This is an extract of a longer piece that was published in the Australian.

Dr Carlos d’Abrera is a psychiatrist and Research Associate at the Centre for Independent Studies. His report, Dying with their Rights On: The Myths and Realities of Ending Homelessness in Australia, is released this week.