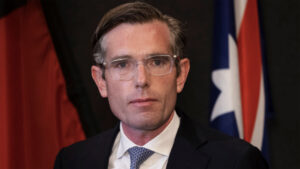 The new Premier of New South Wales (NSW), Dominic Perrottet, and his Treasurer Matt Kean announced $2.8 billion (US$2.1 billion) of new spending last week, which in their words is to “turbocharge the NSW recovery.” It was not billed as a mini-budget—but it could have been.

As a test of the Perrottet government’s approach, the package is not reassuring to fiscal conservatives. Instead, it is a grab-bag of mostly questionable measures with low benefits relative to costs, at a time when the government needs to be especially cautious about adding to spending, deficits, and debt.

In a situation of rapidly rising debt, the hurdle for new spending should be very high. It is difficult to see many of the measures announced last week mounting that hurdle. But they will all add to an already large deficit and rapidly rising debt.

It is no exaggeration to say that the pandemic has smashed the state’s finances.

The increase of $39 billion  (US$29 billion) in 2023 is a rough measure of what was known about the impact of the pandemic up to the middle of this year. So let’s call that stage one of the smashing of the NSW state finances.

That was when then Treasurer Perrottet declared in his budget speech on June 22 that NSW was “open for business, back to growth, and back on track.”

Four days later, the whole of Sydney went into a shutdown that lasted 15 weeks and was joined by the rest of NSW for part of the time.

That lockdown brought stage two of the smashing of the state’s finances. We will get a better idea of the size of stage two when the mid-year budget review is released in December, but it will obviously be more billions.

Indeed, the government boasts that it has “unilaterally committed more than $10 billion in direct support” in response to the winter 2021 lockdown of NSW.

The extra spending of $2.8 billion in last week’s mini-budget is on top of all that.

That is a lot of extra spending—much more than the government would generally announce in new spending in a regular budget.

On the face of it, it doesn’t make sense to incur extra expenses when there is already a budget problem. Moreover, it is not something a fiscal conservative would willingly do.

There would have to be a very strong justification—but is there? The details of the new spending announced last week suggest not. There isn’t a lot of high-quality spending in the package.

It is a weird mixture. The most justifiable items are those providing further support of small businesses under stress because of their enforced closure during the 15-week lockdown.

There is a strong moral case for the government to provide support in these situations. But much of the spending does not come under this heading.

If the justification is general economic stimulus, the case for a state government to do this is weak. This is because the position of the NSW economy in the business cycle depends more on national fiscal and monetary policy settings than on any other policies.

The NSW economy is likely to bounce back strongly as it did from last year’s lockdown.

The dining, entertainment, and accommodation vouchers are not warranted, especially the $250 for households with any school-age children as a “thank you” to parents for homeschooling. This just looks like “feel good” money.

In general, vouchers merely subsidise private spending that would have taken place anyway.

None of this is to suggest that a state government has no role in shaping its state’s economic development—but such a role has much more to do with policies on education, infrastructure, and regulation than deficit spending for short-term stimulus.

The best that can be said of the spending announced last week is that it will be spread out over a couple of years and is of a temporary nature so that it won’t be baked into the ongoing spending base.

A cynic would say it has more to do with making voters feel better about the super-Saturday of by-elections coming up than with strengthening the foundations of economic development in NSW.