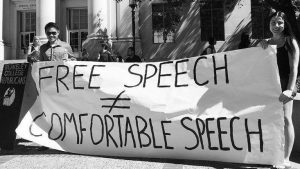 The most concerning aspect of the current debate about free speech in Australian universities has been the complacent attitudes of Australian higher education leaders.

During Bettina Arndt’s recent speech at Sydney University on ‘rape culture’, riot police had to be called onto the campus to allow the event to proceed, after security guards were overwhelmed by demonstrators blocking audience members from attending the venue.

However, according to Sydney Vice-Chancellor, Michael Spence, the demonstration allegedly showed that “free speech is alive and well” in universities; the student demonstrators were supposedly exercising their legitimate right to protest and engage in counter-free speech.

In reality, the violent scenes of verbal and physical abuse witnessed were an example of the ‘no platforming’ phenomena prevalent in North America, which has seen numerous so-called controversial speakers banned and prevented from speaking on university and college campuses because their views are deemed ‘offensive’ or ‘hurtful’ to some students.

But according to Vicki Thomson, the Chief executive of the Group of Eight peak lobby ground representing Australia’s leading universities, there is no need for universities to take action on free speech on campus because she “couldn’t remember a particularly violent protest [on university campuses] in the past 10 years.”

Thomson was responding to the suggestion by Federal Education Minister, Dan Tehan, that Australian universities adopt the charter — the Statement on Principles of Free Expression — introduced by the University of Chicago in 2014 and subsequently adopted by 45 other American universities.

But if university administrators like Spence and Thomson are unwilling to even acknowledge free speech problems, it is difficult to trust them to self-regulate free speech solutions.

These attitudes suggest that stronger government regulation may be needed to actively spur universities to properly protect freedom of thought and expression on Australian campuses.

My new report, University Freedom Charters: How best to protect free speech on Australian campuses, therefore proposes a new regulatory framework — based on the polices announced in the Canadian province of Ontario — which would hold universities accountable for implementing and complying with free speech policies, or have them risk financial penalties.

Tying funding to actively protecting free speech on campus would focus the minds of university administrators on free speech problems — especially the minds, once funding was directly at stake, of administrators who claim there is no problem and mistake legitimate protest with disruptive conduct interfering with the free speech of others.

As I told The Australian  this week, universities should consider the report a “shot across the bows.”

If university administrators don’t like the idea of government regulation, the power to forestall this is in their hands. They should take Minister Tehan’s advice, and put in place robust free speech policies to ensure universities remain true universities committed to free and open inquiry.