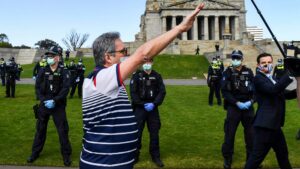 Buffeted by the stormy blasts of COVID-19, Prime Minister Scott Morrison’s government rolled and rocked at times like the Manly ferry in a tempest. And now as he prepares to go to the polls in the first half of 2022, Morrison will be hoping that voters will reward him for his efforts by sending him back to the Lodge for another term.

However, there are already indications that Morrison’s pandemic leadership will not be enough to earn him that treasured prize. But this is not just a problem facing the Liberals.

Support appears to be drifting away from all the major parties, including Labor. Indeed, every indication is that party allegiance is slipping away, drifting to minor, populist parties and to candidates standing as independents.

This trend towards populism and independence, unsettling for the major parties, was confirmed by a recent RedBridge poll conducted in Victoria which found, for example, that the United Australia Party now enjoyed more support than the Greens and had become Victoria’s third most popular party. Meanwhile, support for both Labor and the Liberal Party had fallen dramatically.

Membership of the major parties has been falling steadily for a long time as support drifts to grassroots organisations. For example, the left-leaning campaign group, GetUp, declares that it is “fighting for a fair, flourishing, and just Australia.” Independent activist group, Advance Australia, committing itself to principles rather than parties, now claims to have over three times more members than the Liberal Party.

The popularity of grassroots groups such as these does put the lie to the notion that Australians have lost interest in politics and don’t care about the direction in which the country is heading. Rather, it suggests that many in the community have given up on the major parties because they feel that neither side represents their interests.

Indeed, this is precisely what the supposedly grassroots “Voices of …” campaign group declare themselves to be about. Their main selling point is that they represent no political party at all and that therefore the candidates they field are truly independent.

Even as they fight off allegations that they are nothing but burnished fronts for Labor and the Greens, the “Voices of” campaign claims to be committed to fielding independent candidates—in key, largely Liberal, electorates, such as Wentworth in New South Wales and Goldstein in Victoria—to tap into alleged dissatisfaction with the vested interests of conventional machine politics.

However, the steady drift of support away from the major parties could well, in time, lead to a significant change to the way in which our Australian parliamentary democracy functions. This is because one of the threats posed to processes of good parliamentary government is the gradual diminishing of the role of political parties.

Minor populist parties, such as Pauline Hanson’s One Nation and United Australia Party, neither command nor owe great party allegiance. Their elected representatives are often mavericks who invariably claim to be in parliament solely to represent the interests of their constituents and nothing more. They appear to have little interest in the business of contributing to good government in such ways as might benefit all Australians. The same goes for the growing number of supposedly independent MPs.

Our Commonwealth Parliament shares some features with the United States’ system of government, such as an elected Senate. But it also reflects, to a substantial degree, the model of parliamentary democracy inherited from the United Kingdom characterised by the election of representatives bound by allegiance to the platforms of political parties.

Political parties only began to emerge in Britain in the late 18th century, notably during the premiership of the Earl of Rockingham, whose private secretary—and member of the House of Commons—was none other than Edmund Burke. MPs continued to be elected by voters in particular constituencies, but now once in parliament, they began to organise themselves around platforms reflecting their allegiance on particular issues, such as taxation and tariffs.

Australia’s parliamentary democracy inherited this historic British practice of organising MPs by means of platforms and groupings. Today, in our parliamentary system, political parties exert a discipline upon otherwise maverick MPs, keeping them in line, marshalling them when voting on legislation, and imposing sanctions when party discipline is breached.

Political parties play a central role in the successful functioning of Australia’s democracy. From the outside it can—and often does—look chaotic. And it can be very frustrating when our elected representatives fail to deliver on the promises on which they campaigned.

But parties are the very institutions that underpin our parliamentary system, allowing political interests to be weighed and competing claims to be evaluated. As such, they need to be preserved and strengthened rather than being allowed to wither away and perish.