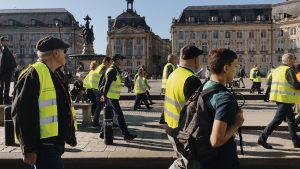 Charismatic French President Emmanuel Macron has made a political faux-pas: his decision to jack up taxes on vehicle fuel as an environmental initiative to reduce auto emissions.

The plan has hit a raw nerve with French citizens — at least those outside the chic 6th Arrondissement of Paris — and unleashed a torrent of opposition and public protest nation-wide.

Obviously, no tax policy can ever justify public violence and vandalism, as witnessed in recent days (French citizens’ opposition to the tax plan has been shamelessly exploited by anarchists). However, peaceful opposition to the tax hike is understandable. As media reports have noted, the crisis has exposed the class divide between the metropolitan and political elites — living in their ‘green’ bubble — and the rest of the French population who rely on diesel cars to get around.

But even more concerning is Macron’s apparent ignorance of basic economics. Fuel excise is a regressive tax. This means that it tends to hit the poor disproportionately. As in Australia, many families in France rely on cars if they live in outer suburbia and regional areas. For them, fuel is not an optional extra but an essential purchase.

Therefore, their demand for fuel is likely to be price-inelastic: people will not necessarily reduce their purchase of fuel when the price goes up.

Instead, families will be forced to cover the hike by cutting their spending elsewhere; such as food and clothing. Hence, raising tax on fuel will hurt the poor but won’t necessarily reduce fuel consumption — which defeats the whole point of the policy.

And this reflects an even greater problem facing not just France, but other advanced economies including the United States and Canada: the growing tension between ‘going green’ and avoiding regressive polices that disproportionately impact the poor.

We are grappling with the same problems in Australia — we want to reduce our emissions but don’t want rising energy costs for families.

In a partial back-down, Macron has now agreed to suspend the fuel tax increase but it may not be enough. This latest French revolution should be an economics 101 lesson for President Macron on the fallacy of regressive green policies — and a warning to our own politicians in the Canberra bubble.