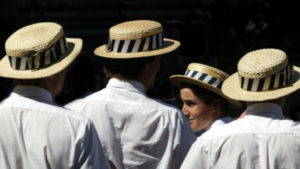 Former NSW education minister Adrian Piccoli has argued this week that non-government schools should receive more public funding, in exchange for giving up the ability to receive fees from parents and select who they enrol.

But neither of these things are responsible for inequity. Sure, Australia’s school system suffers some inequities, but this is due to differences across post codes rather than school sectors.

School choice reduces community ‘residualisation’ because parents don’t have to leave the catchment area if they aren’t satisfied with the local government school.

High-income parents already benefit from school choice — within both the government and non-government systems — regardless of how much taxpayer funding private schools receive. But it’s low-income parents who often aren’t given a choice in Australia, and that’s the problem we should all seek to fix.

A YouGov/CIS poll in 2019 found that 88% of parents think their child’s school has enough resources; however, most parents also said their choice of school was limited. Those that chose non-government schools tended to be more satisfied and confident their schools used resources well.

And improving Australia’s education results — and especially outcomes for disadvantaged students — isn’t just a matter of how much money is spent, but also how it is spent.

This is an inconvenient truth for those who seek a simple solution to educational inequity — generally some combination of more taxpayer funding, curbing of non-government schools, and a shopping list of evidence-free ideas, like more iPads.

The proposal that all non-government schools should be publicly-funded the same as government schools on the condition they give up control over their enrolments isn’t practical. For faith-based schools — especially the smaller, low-fee ones —flexibility in enrolment selection is essential in reflecting the values of their parent community.

While it’s suggested this can be done by reducing the autonomy of non-government schools, the better way is through creating another choice for parents, through a more flexible government school model. That is, combining the best of both worlds.

While ‘competition’ is often seen as a dirty word in education, the truth is having a wider range of school options — with more flexibility to cater for the needs of disadvantaged communities — can boost education results and reduce inequity.

Australia’s education results have declined on international tests over the past 10 years, despite significant increases in school spending, across sectors, and well above inflation and enrolments growth.

Glenn Fahey and Blaise Joseph are research fellows in education policy at The Centre for Independent Studies.