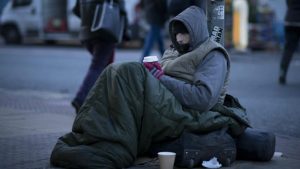 As the details emerge about the background of Courtney Herron’s alleged killer, we need to take a serious look at the problem of homelessness and mental illness. Our approach to these problems has not been working.

Henry Hammond, a 27-year-old homeless man, appears to have had untreated mental illness and issues with substance abuse, including the drugs heroin, LSD and ice.

The real cause of homelessness — and of the tragic events in Royal Park — relate to a lawless homeless subculture in which mental illness and drug abuse are rife.

The rate of mental illness is up to 40% in homeless persons, and even higher in ‘rough sleepers’.

And as I point out in the CIS paper Dying with their Rights On: The Myths and Realities of Ending Homelessness in Australia, although the government already spends $10 billion a year on housing and homelessness, rates of rough sleeping are increasing.

Approximately 8,000 Australians continue to sleep rough each night because homelessness services have not been assertive enough at getting people off the streets. Outreach workers are reluctant to violate the ‘right’ of people to sleep rough and refuse treatment.

Homelessness services have therefore proved unable to help because they refuse to take an effective approach to assisting people to exit the streets.

Long-term care facilities offering high levels of support would benefit the chronically homeless and gravely ill people — who will otherwise continue to live and die on the streets.

Drug and alcohol treatment must be made mandatory for homeless addicts, as must compulsory mental health assessments to ensure that appropriate treatment reaches those who need it.

This is an edited extract of an opinion piece published in the Herald Sun’s Rendezview section.