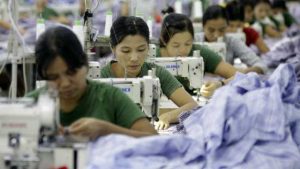 What should be our attitude towards the manufacturing of cheap fashion in Asian ‘sweatshops’, where workers are subject to poor pay and conditions?

This was the thorny topic when I took part in a panel for ABC Radio National’s program, The People vs. Fast Fashion.

Obviously, we should condemn unequivocally the exploitation and mistreatment of workers — for example, the gross negligence that caused the deadly collapse of a Bangladeshi clothing factory in 2013.

However, concerns about low wages can make us believe that garment-making jobs are of no value to the poor (even if the work is safe). But this assumption ignores some key facts.

First, wages in the garment industry — while undeniably low — are often under-measured, as they are simply converted from the local currency into US dollars. But this won’t reflect a wage’s true purchasing power, as goods and services tend to be cheaper in less developed countries. For example, a US dollar will buy a lot more in Bangladesh than Australia.

And thirdly, low-value manufacturing is often a temporary stage in the cycle of economic development. China provides a prime example of this.

In the 1980s, it emerged as a manufacturing powerhouse and became the world’s leading producer of cheap clothing. But now China’s garment industry has started contracting, as its economy shifts towards more technical forms of manufacturing — a good thing for Chinese workers. In fact, manufacturing wages in China tripled in the decade to 2016, thanks to workers becoming more skilled and productive.

And in the future, we would expect to see a similar pattern of economic development and wage improvement in Bangladesh and other countries that rely heavily on garment-making jobs. In fact, there is already evidence of progress: the proportion of Bangladeshis living below the upper poverty line has halved since 2000.

In the meantime, we should support efforts to improve the working conditions of those who make our t-shirts — while also recognising the value of basic manufacturing in propelling the poorest economies to a better future.