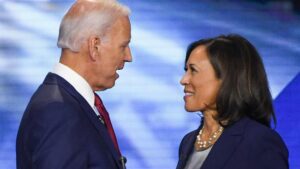 Cue the pigeons of confected outrage and send in the cat. What has the left flock all fluttering and squawking is Johannes Leak’s cartoon lampooning Democratic presidential candidate Joe Biden’s words about “brown and black girls”. But there was not a single feather ruffled about the terms when Biden originally used them.

It’s another example of the imputation that everybody on the right is racist and nobody on the left could possibly be.

Those on the left are so blinkered ideologically that they cannot see, or cannot admit, that their condescending identity politics and tokenism are rooted in racism.

In their stampede to push Biden’s campaign, they are prepared to ignore his racist remarks about “brown and black girls” and (disturbingly) his repeated assertion to the African-American community: “If you have a problem figuring out if you’re for me or Trump, then you ain’t black.”

But instead of being offended by this blatant playing of the identity politics card, which stereotypes people with racial tropes, the left takes to the barricades over a cartoon that uses Biden’s own words against him. The cartoon incisively skewers Biden — a former vice-president — for choosing a running mate not on the weight of her career and achievements but because of the identity politics appeal of her skin colour and her gender.

Imagine the left’s reaction had US President Donald Trump announced the appointments of Small Business Administrator Jovina Carranza as “bringing hope to Mexican girls” or Secretary of Transportation Elaine Chao as “bringing hope to Asian girls” — let alone referring to them as perhaps “brown” or “yellow”.

It is assumed by the left that to overcome racism we must follow the principles of identity politics and appoint individuals to positions of power because of the colour of their skin and/or their gender.

Those on the left also obviously believe that we brown and black girls can’t cope with subtlety and complexity when it comes to discussing race and gender issues in the way that Leak so obviously can.

He has used Biden’s words to highlight the divisive, insidious and offensive use of identity politics as a means of self-promotion.

But the left, while giving Biden a pass on using the terms, then presumes to speak on behalf of “black and brown girls” and attacks Leak for doing what every good cartoonist should. Why do those on the outraged left feel they have every right to speak on behalf of “brown and black women and girls” around the world, such as me? We little brown and black girls can speak for ourselves.

The late, great Bill Leak understood this; Johannes Leak understands it too. Those on the left ignored the truth to attack the father for revealing their flaws; and now they go after his son. The truth of identity politics exposed in Leak cartoons, both father and son, will do more to overcome racism than self-serving identity politics that simply entrenches the problem.