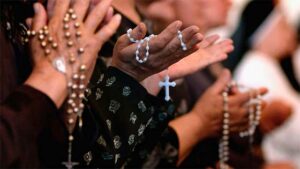 Unless we are vigilant, Australians will soon find that any public declaration or practice of an explicitly religious viewpoint—particularly a Christian one—whether in relation to gender, sexuality, euthanasia, or even history, will be condemned as harmful hate speech. And that condemnation is likely to become ever more bitter.

For as things stand, there is very little protection for religion in Australian law.

Section 116 of the Constitution only sets a limit on what the federal government can do, and the states and territories have only a patchwork of inconsistent protections for religion in the form of exemptions to discrimination laws.

This is a key reason why the Morrison government is taking action on the prime minister’s 2019 election promise to legislate protections for religion.

Attorney-General Michaelia Cash, is reportedly close to finalising the government’s Religious Discrimination Bill in order to present the draft to parliament by the end of the year. The Morrison government is keen to get the matter off the table before the next federal election.

Opponents of the new federal bill say that there’s already more than enough protection for religion—although they can’t identify precisely what it is—whereas advocates for the bill say the proposed protections do not go nearly far enough.

At the heart of these differences lies the crucial distinction between stopping discriminatory action on the one hand, and protecting religious freedom on the other.

What a religious anti-discrimination law says is that the actions of a religious organisation—that would normally contravene the law—would instead, be granted an exemption if they are faith-based actions—that is, if their actions are consistent with the religious ethos of the organisation.

For example, churches whose religious ethos is opposed to the ordination of women will be exempt from sex discrimination laws and can exclude women from certain selection and appointment processes.

By making religion a “protected category” the law ring-fences religion and grants certain exemptions. The government’s proposed bill would grant these exemptions at a federal level by stating that any regulation having an adverse impact on religious practice will need to be justified.

By contrast, the very different approach of protecting religious freedom as a positive right would give a faith-based organisation the legally conferred freedom to take such actions as recruiting staff who support the institution’s religious ethos, or opting out of administering euthanasia, or declining to provide abortion services.

One drawback to the anti-discrimination approach to protecting religion is that it can cast religion in a bad light.

Granting religious Australians apparently preferential treatment in circumstances where other people would be penalised only fuels the antagonism of anti-religion, secular activists who insist that believers are given special licence to be bigots. No wonder they resist any effort to extend religious anti-discrimination provisions.

And no wonder the faith communities, and many of their leaders, would prefer a new law concerning religion to be framed as a protection of religious liberty: in other words, as a law asserting a positive right to religious liberty—that is, as a legal “sword” to safeguard religious freedom, rather than as an anti-discrimination “shield” to defend against attack.

However, lest the perfect be the enemy of the good, it is far better for Attorney-General Cash to present to the Parliament a realistic bill that has a good chance of being passed rather than an ideal bill that would be voted down.

Lawyers and religious leaders might argue about the way legal protections are framed, but better to be armed at least with a shield if no sword is viable.

And such realistic legal protections are still likely to be popular at the ballot box. A recent poll commissioned by the Australian Christian Lobby (ACL) suggests that nearly two-thirds of us want religious faith to be legally protected.

The ACL poll showed that around 65 percent of those questioned support legalising protections for people of faith. The right of faith-based schools to appoint sympathetic staff is supported by around 60 percent. And over 50 percent support the right of faith-based organisations, such as hospitals, to opt-out of procedures, such as abortion or euthanasia, that contravene their foundational religious principles.

The timing of the ACL poll is important. But at the end of the day, the law can only go so far in protecting religious freedom. Reliance on Parliament and the courts to resolve differences only induces each side to push ever harder to secure their preferred outcomes in what becomes a zero-sum game.

But Australia is a successful multicultural society comprising people of all faiths and none. As such, we must allow for the expression of different points of view and beliefs, both sacred and secular, and we must learn to respect the world views and preferences of those with whom we may never agree.

Each of us bears responsibility for helping to secure the civic health of our society—a task we must never outsource completely to governments and judges.