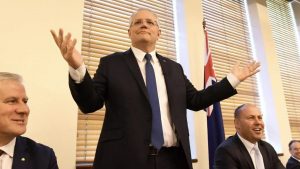 The Coalition’s unexpected victory wasn’t the only miracle on election night.

The electoral success of the “Messiah from the Shire” has also allowed the Quietest Australians — the largely silent mass that still holds traditional views and values — to discover their hidden culture warrior.

Many pundits have been forced to explain why middle Australia not only rejected Bill Shorten’s class-war rhetoric, but also spurned Labor’s enthusiastic embrace of identity politics and progressive ideology agendas on issues such as free speech, gender, and religion.

Few commentators have admitted being wise only after the event about the big political story of the election: the cultural divide that has been exposed between inner city elites and ordinary Australians in the outer suburbs and regions.

Nor has there been any apology to the alleged reactionaries who were said to be obsessed with fringe culture issues of supposed concern only to the allegedly near-extinct, conservative base of the Liberal Party.

In reality, the election has shown that the positions of the “Del-Cons” — the so-called “deluded conservatives” — on many issues actually reflect the traditional attitudes of mainstream Australia.

To be fair, if you live in the insider bubble, it was easy to miss this story.

All our key culture-shaping institutions — schools, universities, the bureaucracy, the media — have embraced identity politics and progressive ideology.

This also includes corporations; Australia’s big public companies, which have done so under the rubric of so-called Corporate Social Responsibility (CSR).

The long march of the left is increasingly making our key business institutions inhospitable places for those with conservative and traditional views and values.

But it’s not just groupthink that explains why people working in our key institutions are so quiet in the face of the progressive onslaught.

Understandably, many people stay silent and consent to progressive “social responsibility” agendas to avoid the social and professional consequences that dissenters from the politically correct consensus can face in these increasingly intolerant and polarised times.

This also means, however, that some of the efforts of those fighting the culture war in the crowded social media space are actually counter-productive.

Many of the new tech-enabled culture warriors strike poses that trade in outrage and polarisation (think Milo, think Fraser Anning). Unfortunately, this only serves to alienate — rather than make allies of — potential supporters who rightly fear being tainted by any association with alt-right.

Alt-right posing generates lots of heat — by impotently railing against the left — but unfortunately very little light about what can actually be done to reclaim our traditional institutions.

No wonder, therefore, that people working in big corporates prefer to stay quiet, especially given what is at stake: careers, mortgages, school fees, and superannuation.

What is missing is the sound and sensible cultural leadership that can convince people to not remain quiet and confidently speak up for traditional values that are genuinely under threat and at stake in the many-fronted culture war.

In Corporate Virtue Signalling: How To Stop Big Business from Meddling in Politics, I outline the apparent takeover of big business by politically correct lefties.

The book also warns companies that by endorsing progressive agendas, they risk politicising their reputations, and alienating from their brands the millions of conservative members of the community who do not subscribe to such politically correct agendas.

The problem is that many corporate leaders may not realise how divisive their CSR politicking is, because they live, work, and socialise with like-minded elites deep inside their inner city “bubble”.

Hopefully, the election result will burst this bubble and make corporate elites aware where the true centre of mainstream opinion lies in Australia. Surely, the only ones who won’t get it now are the truly tin-eared.

So now is perhaps an opportune time to introduce a new principle — the Community Pluralism Principle — into the management of companies.

This would hold directors and CEOs accountable for making sure CSR activities don’t stray into meddling in contentious political issues, and instead properly respect the pluralism — the different views and values — of the diverse Australian community.

If this principle was supported at shareholder meetings by the “mum and dad” investors fed up with companies indulging in political activism, the Quiet Australians would send a powerful message to penetrate the dense bubbles of corporate boardrooms: business should halt the corporate virtue signalling — and stick to business.

This is an edited version of a speech given at a session on The Rise of the Regressive Left at the Australian Libertarian Society Friedman Conference in Sydney last weekend. Jeremy Sammut is a Senior Research Fellow at The Centre for Independent Studies, and author of Corporate Virtue Signalling: How To Stop Big Business from Meddling in Politics, which will be launched next month in Brisbane by Senator Amanda Stoker and in Sydney by former ASX chair Maurice Newman.