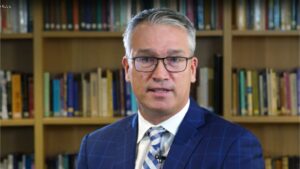 We’re only a few weeks into the coronavirus crisis, and already our intellectual opponents are arguing that the coming recession is an indictment of capitalism. After decades of ‘small government’, the nanny state philosophy of redistribution and control is back with a vengeance. When ACTU leader Sally McManus and the left-wing activist group GetUp praise a Liberal government, you know we live in remarkable times.

CIS has long championed values of individual freedom, fiscal responsibility and limited government, and my colleagues and I profoundly disagree with the emerging policy consensus. True, relief in a crisis is a proper role for government — especially addressing short-term hardship (job loss, illness). However, it is appropriate for groups like CIS to subject government spending and security initiatives to sound scrutiny. What are the likely unintended consequences of the wage subsidy, skyrocketing debt, schools shutdown and the rights clampdown, for instance?

Covid-19 represents a liquidity crisis caused not by business or reckless CEOs, but by the government strategy to shut down the economy in order to reduce the spread of the virus and loss of life.

It’s also a myth to say the size of the state shrank before Covid-19. Indeed, government spending as a percentage of GDP, especially on health and education, has increased in the past decade. Don’t forget, too, that the government would not have the money to spend without our vibrant private sector — and all the spending will be repaid in the future via the market economy.

Moreover, higher levels of government spending and higher taxation will bankrupt our nation and retard our economic recovery. The best way out of this crisis, as I point out here, https://www.youtube.com/watch?v=XLna5MdXuaI

is for our political leaders to prosecute  a new reform agenda that improves incentives to work, lifts productivity, spurs a revival in business confidence and strengthens long-term growth and living standards.

It is against this background that some of my CIS colleagues here reflect on the perils of some of the recent government initiatives in the Covid-19 era. An independent voice such as ours is needed more than ever.