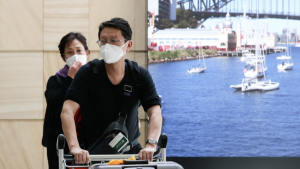 China’s coronavirus outbreak has disrupted travel plans for millions of people – and could cost Australian universities millions of dollars. Within China itself, the virus epicentre in Wuhan, a city of 11 million people, is in lockdown. Tens of millions of others have been prevented from travelling during the Chinese New Year holidays. And of course more than 600 Australians are trapped in Hubei province, awaiting evacuation.

For students threatened by a deadly and fast-spreading virus, classes may be the last thing on their minds. But university administrators are running scared. The University of NSW has been hit by a student infection — and the academic year hasn’t even started.

With more than 30,000 Chinese students due to arrive soon at Sydney and UNSW, and another 8000 or so at UTS (none of the universities publish exact numbers), the threat of a public health crisis is real, but manageable. Universities can closely monitor classes and dormitories. Infected students can be quarantined and treated.

Much harder to manage will be the financial impact if 40,000 students simply don’t show up. Chinese students account for more than 10 per cent of total revenue at many Australian universities, and more than 20 per cent at the University of Sydney and UNSW, according to my estimates published by the Centre for Independent Studies last August. Revenue losses on that scale could be catastrophic.

When the CIS sounded its warning with my report, The China Student Boom and the Risks It Poses to Australian Universities, it seemed the key triggers of a potential drop in Chinese enrolments might be economic or political. No one anticipated an epidemic. But the spread of coronavirus has raised the very real possibility that Chinese students will be unlikely to travel to Australia this academic year, even if universities (and Australia’s public health authorities) are happy to have them.

For now, it is still possible to travel from China to Australia, but British Airways has cancelled all flights in and out of China, and many Asian and American carriers are following suit. These cancellations are partly driven by health concerns: airlines are understandably reluctant to expose their staff and passengers to a potentially deadly virus.

But flights are also being cancelled for economic reasons. Load factors (the percentage of seats filled with passengers) on China-bound flights have collapsed. It’s little wonder. Even the University of Sydney — which is eager to accommodate the return of its Chinese students — has prohibited all non-essential staff and student travel to China.

Other employers are sure to follow suit. You can’t run a commercial airline as an evacuation service, with all your passengers flying in one direction. Right now it already costs more than twice as much to get out of China as it does to get in, and that ratio is only likely to rise as the crisis deepens.

Qantas has so far maintained service levels, but it has offered full refunds to any passengers who prefer not to fly. In such a situation, it is only a matter of time before the gates close for good.

Recognising the challenges students face in getting to Australia, the University of Sydney has pushed back its enrolment deadline from February 21 to March 9, a full two weeks after classes begin. Other universities are likely to do the same. So the academic year will be off to a soft start. Many business school classes, where there is a concentration of Chinese students, may not be able to begin at all.

In 2019, Australian higher education institutions enrolled almost half a million international students, more than 150,000 of them from the People’s Republic of China. There is no alternative to this Chinese pot of gold. Many Australian universities hope to switch to India, but the numbers just aren’t there: India has only about one-eighth as many middle-class families as China. The only alternative to the China market is fiscal belt-tightening.

On top of the immediate travel concerns, the coronavirus epidemic is likely to have a serious impact on the Chinese economy. Students who were prevented from commencing their degrees this year might not be able to come next year. Due to the start-of-term timing of this epidemic, its economic impacts could ripple on for years.

The immediate concerns raised by the coronavirus are, of course, health and safety. But looking long-term, the epidemic exposes the poor planning of Australian universities, which aggressively chased Chinese student numbers without taking proper account of the risks. The coronavirus epidemic has brought those risks into sharp focus.

Unfortunately, it is now too late to mitigate them. Universities have few options to make up the lost revenue. As UNSW vice-chancellor Ian Jacobs admitted last August, universities “have limited financial reserves to deal with decline”.

Long-term commitments to salaries, infrastructure, and research can’t be cut at a moment’s notice, and unlike their American cousins, Australian universities have relatively small endowments. Their only realistic options are to borrow – or to ask Australian taxpayers to cover their losses.