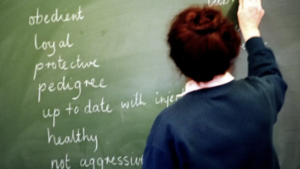 Australia’s education unions continue to demand yet more funding, rather than provide solutions to improve the performance of the teaching workforce and to lift our educational outcomes.An “independent” review into “valuing the teaching profession” –commissioned by the NSW Teachers Federation – commenced public hearings last week. Its tasks appear to include providing cover for renewed salary demands.

Yet there appears to be no basis for union claims that teachers and schools have been short-changed, nor that this is to blame for concern about teaching’s status or for Australia’s declining educational outcomes.

Over $60 billion a year of taxpayer funding is already committed to schools. But despite the record investment in schools and teachers, our education system is delivering poorer outcomes. The OECD-run Programme for International Student Assessment (PISA) has recorded devastating declines in Australian students’ achievement – the second steepest collapse in the world.

Education unions insist that any problems with teaching’s status are from outside, rather than inside, the profession – routinely blaming alleged undervaluing of teachers by society: code for wanting higher pay.

Australia’s teachers are denied the basic performance management enjoyed by just about any other workplace.

Rather than the level of pay, the fundamental problems are the flat pay structure — which has virtually no nexus with performance – and that this has made teaching unattractive to a generation of high-ability graduates.

Resistance to address underperformance where it occurs can no longer be accepted – nor the educational collateral damage this entails.

It’s little wonder students have under-performed; given teachers are working in an environment that fails to identify the best, those who need extra support, and those who are not contributing to students’ learning.

Consistent, independent, and objective assessment of staff performance in the classroom will help teachers improve their craft, and ultimately deliver improvements in student achievement.

While policymakers are acutely awake to these issues, they’ve generally been misguided in addressing them. Namely, to improve the standard of incoming teachers, the conventional wisdom has been to impose supply restrictions as the policy lever of choice.

These have included the blunt instruments of: tightening the eligibility to become a teacher (such as ATAR cut-offs and aptitude tests); increasing the hurdles needed to jump for accreditation (through compliance with additional professional standards); and requiring additional years of study and professional development to qualify for positions.

International evidence shows that such efforts only serve to cut the pool of available teachers willing and able to work in the field. Perversely, that further entrenches endemic workforce problems – including chronic shortages in key subject areas, upward pressure on wages, and remuneration inextricably tied to tenure and qualifications (rather than ability and performance).

Rather than cutting the supply of teachers, policymakers should be expanding it. A wider pool of teaching applicants means schools – and the universities who admit prospective teachers – can be more selective in who they accept. Armed with more candidates, they can make better selection and recruitment choices.

More competition for limited places will make it harder, not easier, for low-ATAR candidates to make it to the chalkface.

Everyone wants to see teaching’s status lifted, but that must come from the profession genuinely embracing professionalism.

Any constructive review to solve teaching’s workforce challenges should start with identifying definitive and objective performance measures, rather than tipping the scales in favour of additional funding without accountability to match. Teaching can no longer be an exception where demands for funding come first and results come later.

Australia deserves a smarter investment in human capital – particularly given the challenges of our uncertain future. Getting the investment right in teachers and schools will be key to unlocking this productive potential.