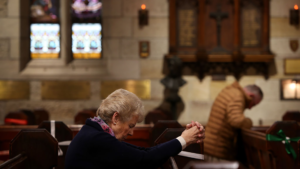 Time appeared to be running out for the Australian government to deliver on its 2019 election pledge to legislate protections for religious believers and faith-based organisations.

But in late November, Attorney-General Michaelia Cash finally briefed the Coalition party room as she prepared to put the exposure draft of her Religious Discrimination Bill 2021 before the Parliament by year’s end.

This is a re-worked and slightly watered-down version of an earlier Bill prepared by Cash’s predecessor, Christian Porter.

Some of the proposals put forward by Porter are out. Gone, for example, is the former Bill’s so-called “Folau clause”—named after Israel Folau, who was sacked by Rugby Australia for posting online teaching from Christian scriptures that called for various categories of sinners to repent. Adulterers took it on the chin; others were less sanguine.

The Folau clause would have required an employer with an annual turnover of more than $50 million to prove that an employee’s statement of religious belief caused the company financial harm, and only then could it take action.

The clause was dropped from Cash’s exposure draft when it became clear it would not be acceptable to opponents of the Bill who feared it would licence open displays of homophobic bigotry.

But the new Bill will protect those who wish to practice their religion openly from being dismissed by professional bodies, such as medical associations.

In addition, faith-based organisations appear to have won the right to hire staff—including school teachers—who share their religious ethos.

However, healthcare professionals are unlikely to win protections for withholding services, such as contraception or abortion, because of a faith-based objection to the practice.

As MPs prepare to debate the Bill before the end of the parliamentary year, supporters are taking stock of the kinds of protections now on offer from the Morrison government.

Some faith leaders would have preferred stronger protections—such as the Folau clause—to remain in place. Others had argued that what Australia needed was a new law creating a positive and enforceable right to religious freedom.

Religious freedom is already a fundamental human right proclaimed unequivocally in the international instruments to which Australia is a signatory, such as the Universal Declaration of Human Rights (1948) and the International Covenant on Civil and Political Rights (1966).

However, in this Bill, the government has eschewed creating a new enforceable right to religious freedom in Australian law.

This is because the government is leery of legislating positive rights—whether a right to religious liberty or a right to aged care—that would be enforceable (seemingly without limit) by unelected and unaccountable judges in the courts.

Critics of a rights-based approach to religious freedom argue that a right, once created in law, inevitably becomes an ever-expanding category that is difficult to contain.

Instead, the government has opted to use the architecture of anti-discrimination legislation, with which the country has been familiar since the mid-1970s, in its latest bid to legislate for religious protections.

This means the Bill will work by creating exemptions that carve out zones of conduct—for example, employment—within which faith-based organisations can operate in accordance with their religious tradition and ethos.

For some opponents who are hostile to religion and think the Bill already goes too far, this is tantamount to creating a licence for faith-based organisations and religious believers to be nasty towards those who do not believe in God or who refuse to adopt their moral precepts.

They conjure fantastical scenarios of gay children expelled from schools, gay gardeners sacked by faith-based aged care facilities, and hatred being spouted from pulpits—all in a bid to generate fears that religion, in whatever form, poses a grave threat to the well-being of society.

The paradox is that this is precisely the kind of anti-religious vindictiveness that gave rise to the need for the Bill in the first place.

Had militant secularists not harried their religious neighbours with such fanatical fervour, making it impossible for those professing a faith to practice it openly and without recrimination, there would have been no need for this legislation at all.

Australia is one of the world’s most successfully multicultural societies drawn from a wide range of cultural and religious backgrounds.

It is absurd for those who oppose religious protections to suppose that their own anti-religious biases should be the ones to prevail and determine how the rest of the community goes about ordering its life.