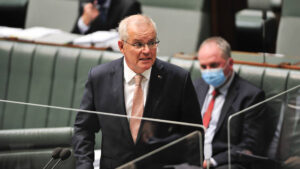 The Morrison government has pulled its religious discrimination bill after it was clear that senate amendments would fundamentally change the nature of the protection being offered. The process of this legislation, which stems from the 2018 Ruddock Review, has now been completely derailed.

The Morrison government owns every inch of this failure.

First, there has been widespread confusion over what is actually in the bill. The government has not clearly articulated its goals and objectives, allowing the space to be filled by misinformation from those opposed to the bill.

The government also appears to have been unprepared for opposition to the bill. This was a serious miscalculation: controversy over the bill should have been expected, especially as it came before parliament immediately after the disastrously managed Citipointe Christian College situation.

In addition, there is significant conflict at the intersection of religious freedom and anti-discrimination legislation. The only lasting solution would involve negotiating with both the opposition and the various factions within the government itself.

Bringing the bill to parliament just before the election, and trying to use it to wedge Labor, made the situation fraught.

It’s not clear why the government thought they could pass this bill without ever having to defend its principles, but that apparent miscalculation has led directly to this debacle.

Of course the government has studiously avoided arguing the positive case for religious freedom for years, so it’s not that surprising.

Broadly, there are two limbs to religious freedom: freedom from discrimination on the basis of your religious belief and the freedom to create and maintain a community of like-minded believers who live in accordance with the tenets of your religion.

Historically, freedom from discrimination on the basis of religious belief has been the most important element of religious freedom. There have been thousands of years of persecution of minority religious groups, at times targeting Jews, Muslims, various Christian denominations, pagan sects — even atheists.

However, such persecution is rare in modern Australian, though the need for protection from it is largely undisputed.

To the extent there is an issue here, it is around statements of belief, and the consequences that may flow from them. There is a strong argument that if someone cannot express a genuine religious belief in public without catastrophic personal consequences (losing one’s job for example), then they do not have freedom of religious belief.

However the argument that freedom of speech and conscience do not mean freedom from consequences is equally compelling.

In the end, it is almost certainly better not to address this balance legislatively: individuals need to push back against anti-religious activists in favour of plurality.

In fact, the controversy over the second limb of religious freedom makes clear why trying to resolve balancing of rights through legislation is not the best approach.

The creation and maintenance of a religious community is a fundamental component of religious freedom. However this can be divisive, especially where traditional faith-based views on sexuality, marriage and gender conflict with modern orthodoxy.

For example, requiring a religious school to treat transgender students a certain way may go against its deeply held religious teachings on gender and human sexuality. Yet others will find any refusal to do so as completely unacceptable.

Activists on both sides claim absolute moral certainty, yet it is nowhere near that clear.

It is also worth remembering the profound revolution in sexual ethics and views of gender in Australia and throughout the Western world in just the past few years. Hammering anyone not yet onboard via anti-discrimination legislation, or excluding them from wider society altogether, exposes the longer-term challenge behind the religious freedom debate.

Nor is the principle behind this limb of religious freedom exclusive to religion — it’s actually part of a broader right to freedom of association.

The problem there is that Australia, and the western world more broadly, has more or less completely abandoned freedom of association as a right worth protecting.

It began, rightly, with requirements for businesses to serve black and indigenous customers and the end of practices like ‘Jim Crow’ in the American South. More dubious restrictions followed however: laws were passed preventing former criminals and then motorcycle gangs from associating on the basis of preventing future crimes.

The full extent of the abrogation of this right was made clear during the pandemic: it became illegal for individuals to invite anyone inside their own home for pretty much any reason or even to safely associate outdoors with two people.

In part, this is why this aspect of religious freedom seems controversial: it seems like a special exemption for religious people rather than a general right we all share (which is subject to some limitations, like almost all rights are).

It is important to note that should we do nothing to protect religious communities, they will diminish over time and be picked off one by one by activists. Such protection does not need to be in the form of legislation, but there is a real threat to be addressed.

How then can we balance the need of religious communities to voluntarily live in accordance with the tenets of their faith with the equally pressing concerns over discrimination against vulnerable individuals?

It would undoubtedly help if all sides of this debate approached this issue in good faith: acknowledgment that it is a complex and difficult issue is lacking at times.

It’s also important to distinguish between those who voluntarily participate in religious communities (like teachers at religious schools) and those who may not have as much choice (a child whose religious parents require them to attend a religious school, for example).

Laws that declare some rights always have primacy over others is not a good way to deal with this issue.

Although the process of the religious discrimination bill has been a failure, it may be that its abandonment is a good thing in the end. Clearly society has more work to do on resolving the conflict of these rights.

Simon Cowan is Research Director and Robert Forsyth is a Senior Fellow at the Centre for Independent Studies.