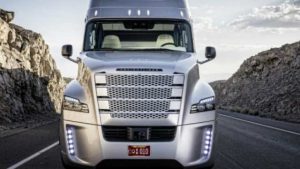 The robots are coming to the rescue. So screamed a headline about artificial intelligence. The article appeared recently in The Times of London and it reported that, just as automation and outsourcing will boost productivity growth, so will driverless cars. They’re reliable, safer and more efficient: what’s not to like?

But as I read about this dazzling prospect, it occurred to me: what will truck drivers do when driverless trucks replace them?

The conventional answer is that former truckies will do “retraining” courses. It’s more likely that many of them will be jobless and dissatisfied with their lot in life. Their numbers will grow, as will their discontent. What will happen then?

We live in an age in which digital technology is revolutionising our lives. Just think of cloud computing and big data analytics. Or the online auction giant eBay, the private car group Uber and the online streaming media group Netflix. All the global tech platforms – Facebook, Microsoft, Google, etc – are truly innovative. They wreak chaos across the business world. And they are reinventing the nature of society.

Some call the new era “disruption”, but I think “creative destruction” is a better descriptor. That’s the famous phrase used by Joseph Schumpeter (1883-1950) to describe capitalism.

By this, the leading Austrian-American economist meant that new products, technology or production methods would provoke change, forcing established companies to adapt quickly to a new environment or fail.

In Capitalism, Socialism and Democracy (1942),   Schumpeter argued: “Capitalism … is by nature a form or method of economic change and not only never is but never can be stationary.” As a result, it depends on a process that constantly destroys old economic structures and creates new ones to meet new market demands.

From today’s standpoint, Schumpeter offers sound insights into everything from the success of Apple and Amazon to the traumas of cabbies and cashiers; and his idea of “creative destruction” seems evident everywhere.

Taxis are the most visible example of a once-dominant industry struggling to adapt: by creating a smartphone rider app and lowering fares, Uber threatens cab cartels.

Schumpeter held another view that is relevant today: discontent. He knew that capitalism is a great success story – as I argued last week, it’s the only system in history to lift the masses out of economic misery – and that the entrepreneur is the driving force of material progress.

However, Schumpeter also warned that capitalism is a doubled-edge sword. As prosperity increases, progress is taken for granted; and the disruption caused by “creative destruction” will become intolerable.

Perhaps nowhere has digital technology played out more dramatically than across the media. Barriers to entry in broadcasting and publishing have tumbled. Cultural gatekeepers have been sidelined. Many more opinions are heard and read. And consumers are increasingly using their iPhones or iPads to follow news and entertainment.

The flipside is that public confidence in the press might continue to decline, especially if news becomes a toxic stew of opinion and gossip. That could undermine the Fourth Estate’s ability to hold institutions accountable. Add to this the mass redundancies across newsrooms, and it’s clear journalism has seen a lot of “destruction” recently.

The populist backlash against globalisation is also vindicating Schumpeter’s thesis. Virtually every western nation that undergoes a process of rapid economic change experiences a nativist reaction to the dislocation involved.

From the right to the left, Pauline Hanson, Winston Peters, Bernie Sanders, Jeremy Corbyn and all those European nationalists resonate with anxious, even hostile, parts of the electorate.

Indeed, it is a mistake to dismiss ordinary folks attracted to populist insurgencies as history’s leftovers. The digitally ditched are as modern as digital technology itself. And they look to the nation state for support.

Which brings us back to the productivity-enhancing transport revolution. Our truckies are ageing and Australia is running short of them, even though demand for the amount of freight to be moved by truck will double in the next decade.

However, there is a downside. When driverless trucks replace truck drivers, there will be a lot of irate people, who equate digital innovation with unemployment. As more and more manual and lower-wage workers are also displaced, the losers of “creative destruction” could help roil politics in a way that makes the Trump-voting angry white men from America’s old industrial heartland look tame. It is hard to imagine a more brutal blow at the image of capitalism.