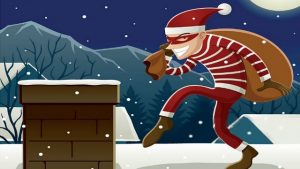 The imagined sounds of reindeer hooves clomping on the roof, and those of a laden man clambering into the chimney, have thrilled over-excited, sleepless children for generations.

But in their excitement, they refuse to heed repeated warnings about the threat Santa actually poses to Christmas. Jesus spotted an early danger sign and expressed himself with characteristic candour.

But there is yet more to the backstory of Saint Nicholas — as he is known in church circles — a third-century bishop in Asia Minor (Turkey) noted for his secret gift-giving.

So from Saint Nicholas to Saint Nick to Santa Claus – and the creation of one of the world’s most famous and tightly held brands.

Of course, Santa did not invent Christmas: he merely saw its potential. Just as Ray Kroc saw limitless possibilities for the hamburgers sold by the McDonald brothers, Santa Claus — as he now chooses to be known — quickly spotted that the route to retail lay through reindeer.

Revenue comes from Santa’s gifts — toys created by large teams of small elves whose working conditions are clearly ignored by the UN Special Rapporteur on Christmas.

But methane emissions from the “eight tiny reindeer” — as those beasts were described by the 19th century poet of Christmas, Clement Clarke Moore — mean that Santa also faces logistical challenges.

Climate change means Christmas change, because global warming can apparently leave no aspect of our common life untouched. After all, belief without action is devoid of meaning. So we need to talk about Santa.

Rumours that the contentious ‘Santa issue’ would surface during the Wentworth by-election campaign proved to be without substance, despite strong international lobbying as the festive season loomed.

Pollution from Santa’s supply chain has caused a hockey-stick spike in CO2 emissions and threatens the human race with imminent and certain extinction.

But Santa refuses to accept the verdict of climate alarmists on reindeer emissions. And eco-catastrophists’ warnings have also done little to dent consumer confidence.

Shares in Santa’s Consolidated Christmas Holdings (CCH) remain buoyant as markets expect each Aussie secret gift-giver to part with an average of $1396 over the tightly regulated festive season.

And, as yet, there is no appetite at CCH HQ for any attempt at emissions reduction. Thief, bandit – and, now, climate denier?

Yes… we do need to talk about Santa. Before it’s too late, and the globally-warmed, climate-changed, reindeer-damaged sky falls in.